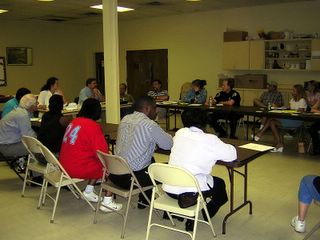 Paul Johnson (behind and to the left of the support beam) of MDHA announces the designation of a grant for Salemtown during tonight's Salemtown Neighbors meeting. Photograph by S-townMike.

Earlier this evening, Paul Johnson, Assistant Director of Community Development for MDHA, introduced himself to a group of 20 Salemtown Neighbors and other interested individuals. He spoke about the Community Block Grant designated for S-town beginning next August and running for three years.

When asked about how much money had been given for projects in S-town, Mr. Johnson played his hand close to the vest, which is pretty much what I expected. No need to divulge that info until community leaders are organized into a committee that can be educated and organized to define the needs of the community.

Mr. Johnson did say that the types of expenditures that can be considered are infrastructure developments, including new sidewalks, new structures to fix storm drainage problems, and park improvements. The things that cannot be funded include building new housing or paying city workers' salaries. The committee's decision has to be approved by Metro Council.

When Mr. Johnson heard from members that Salemtown now has two associations, he expressed the hope that the two would find away to come together before the block grant decision-making process begins in a few months.