Do Tell, Pray Tell, What Exactly Is The Purpose Of The Metro Codes Department? 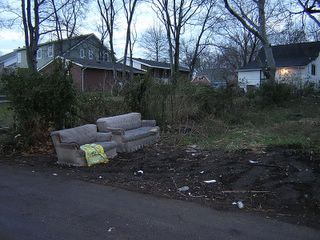 Before my report to the Dept. of Codes on March 22: Two abandoned couches. Photograph by S-townMike. 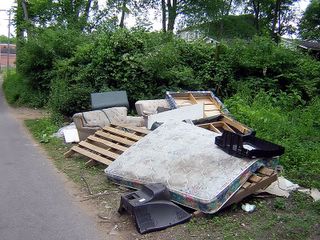 After my report to the Dept. of Codes: in fact, much after. This May 11 photo shows the two same abandoned couches joined by a host of other pieces of abandoned furniture. Photograph by S-townMike.

I had heard the horror stories from builders, neighbors, and others about Metro Codes and their seeming unresponsiveness. After recent experiences trying to get responses from the Dept. of Codes, I realize that I should have believed them.

Take the case of the abandoned couches. Nearly two months ago, I reported to Codes that a couple of couches had been abandoned on a nearby property.

Let me back up and provide more background. Two weeks before these abandoned couches appeared on the property, I noticed that other furniture had been dumped there. So, I went to the Codes website to report the other furniture. A few days after I filed the report, the previous furniture disappeared. I thought, "Man. Codes is on the ball." A customer service rep. in the department's "Property Standards Division" even sent me an e-mail response, saying that their inspector was on the case.

However, trouble started when I happened to drive by the property again on Friday, March 18 and saw that the stylish off-white couch and love seat in the pictures above and below had been dumped in place of the previous furniture (if you look at the pictures of the couch and love seat, you'll notice a large, bare spot on the ground around them, which pretty much distinguishes the foot print of the previous furniture dump).

So, I replied to the Codes rep. that, while the previous furniture had been removed, an off-white couch and an off-white love seat had appeared. I suggested to the rep. in my e-mail that perhaps this is a site that dumpers consider a regular dumping ground. It seemed logical to me that perhaps inspectors should make a note of this site as a chronic problem.

The response I got back from her was pure bureaucratic jargon and it was unsettling to me. She wrote that the inspector had closed the case saying, "no violation found." If the inspector had not found a violation, I surmised, then Codes was not so much on the ball as I originally thought. Someone else was responsible for clearing the pre-off-white-couches dump. The codes rep. suggested that the "couch" (her spelling; she obviously did not pay attention or did not have a clue about them) might be in the alley, in which case I should contact the Health Department. I felt that I was getting the brush-off; the bureaucratic side-step.

Now, I'm not a professional surveyor. But I do have a notion that side fence lines generally stop on at or near a property line, and they tend not to go into the alley. That would be a code violation! So, I went back out and I used the end of the side fence as a gauge for judging for myself whether the couch was in the alley. I'm just a concerned layperson who does not want to see the neighborhood become a dump. And while I was there, I took pictures.

When I got home, I wrote a response to the Codes rep. I acknowledged again that the previous furniture had been removed, and I suggested to her that the inspector might have seen the property after it had been removed, in which case, there was no violation. I reiterated that as of Friday someone had dumped again. I told her that it seemed to me (using the fence line as a guide) that the couch was clearly on the property and that the love seat was at least halfway on the property. I asked her why it was up to me to follow up with the Health Dept. about the love seat, which may or may not have been on the property from a layperson's point of view. I asked her why she couldn't coordinate the efforts herself, since my only duty was to report offences. Besides, what if the couch is halfway on and off the property, by bureaucratic, pass-the-buck logic, somebody needed to saw the love seat in half. Codes would deal with one half; the Health Department with the other. Finally, I attached the pictures I took just in case she questioned my veracity.

My e-mail seemed to make some kind of impression. The Codes rep. responded quickly that she forwarded the photographs to the inspector, and he had assured her that he would follow up and let her know the results. That was the last time I heard from Codes. It was March 23. She didn't tell me that I was the one who should be back in contact with her. I simply assumed from her response that once she got the results she would get back to me. Or maybe I was wrong. Maybe I should have put all of my other priorities aside and become consumed with two stylish abandoned couches, until the problem was resolved. Maybe. But good manners dictate that they could have at least warned me that I would need to be preoccupied with Codes violations before reporting any violation.

As I said, it's been nearly two months and she has not gotten back to me with the results. Maybe she's still waiting for the inspector to complete the report. I do not know. But in the meantime, the stylish white couches have been joined by a regular cornucopia of abandoned furniture. If Codes ever goes on a quest for the dumper's horn of plenty all they need to do is drive up the alley between 4th and 5th Avenues. While they are there, maybe they could see about having those two couches I originally reported removed. But they are going to have to solve the dilemma of whose half of the love seat is whose first. 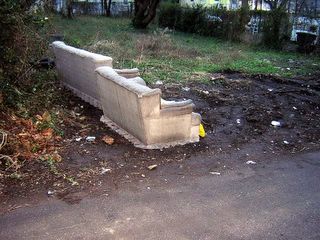 Before. Abandoned couches on a vacant lot. Photograph by S-townMike. 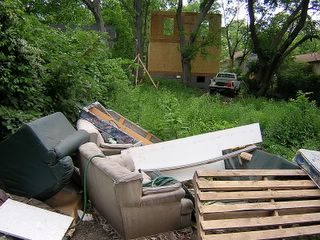 After. Abandoned couches with more abandoned crap on a developing lot. Photograph by S-townMike.