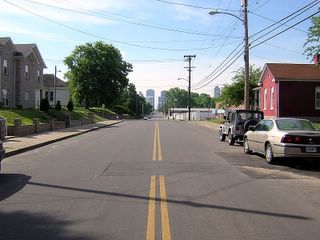 Looking south down 5th Ave., North from Salemtown to Downtown. Photograph by S-townMike

It's not formula car racing, but automobile traffic flies up and down the Salemtown stretch of 5th Ave., North; many times well over the speed limit.

I do not know what the traffic flow experts around town are saying about near north Nashville traffic patterns, but I have come to my own conclusions. Traffic passing Jefferson St. while heading away from Downtown gets bottle-necked in south Germantown at the Germantown Cafe. The bottle neck is caused by a narrowed street and curbside parking by residents and Cafe patrons. There is just about enough room in the actual traffic lanes for two compact cars to drive comfortably past each other. SUVs and luxury sedans have to slow down to a crawl to make sure that they don't sideswipe. Other factors are the patrons of the Cafe slowing to either find a place to park or to drop off for valet. Finally, people also slow down to rubberneck because the row houses along between Madison and Monroe are attractive.

I think that is a solid first component of my theory, which I base on experience. All in all, I would say that I average about 15-20 mph every time I enter the Germantown bottleneck on 5th. I'm not sure whether dampening effects were planned for the neighborhood, but they are working out well for pedestrians.

Once they hit Monroe, drivers must experience a veritable sense of freedom. Why? They make their last mandatory traffic stop (stop sign) for about 5 blocks. "The South Germantown Crawl" or "The 5th Avenue Squeeze Out" lies behind them. The road immediately expands to a width that would allow 4 Chevy Suburbans to drive side-by-side without fetters or caution. Welcome to the North End Drag Strip.
Even as the road widens north of Monroe, it also stretches out straight away in the field of vision as a tempting asphalt ribbon, the end of which beckons lead-footed drivers without any visible obstruction. "Adventure's waiting just ahead." No stop signs or traffic lights or narrows or curves. Just a fat "double yellow" between point A (Monroe) and point B (Garfield). And one can see all the way down the pike.
Even though Salemtown residents' cars line the street along the last block before point B is reached, many drivers are already traveling so fast by the time they hit Salemtown, that slowing up takes virtually the entire last block. That's too fast in a neighborhood crowded with kids playing football in their front yards, riding their bikes in the street, and goofing around the Morgan Park Community Center. It's too fast in a neighborhood where parents are unloading kids from their parked cars on the street. Drivers heading south to Germantown do not drive much slower, knowing that their next stop is at Monroe, which is blocks away. North end traffic flow gives the impression that it was made for people passing through, while the houses and park say otherwise.
That's my quick and dirty theory on the reasons why traffic flies along at the north end. I have a few ideas for fixing the problem of speed out-of-place. Options include more stop signs or traffic signals at either Taylor and 5th, Van Buren and 5th, or Hume and 5th. The Hume and 5th option seems the most remote, since 18 wheelers turning on to 5th require two traffic lanes to make the turn in order to reach the Werthan Packing Plant loading docks. Traffic sitting at a stop light or sign would block one of those lanes. The Taylor and Van Buren intersections with 5th seem more feasible candidates for signs or signals. Other dampening options north of Hume--including extending the northern corner curbs at 5th and Hume, installing speed bumps, or adding bike lanes--also seem to be viable options.
Something needs to be done to slow speeders down before some serious accident, especially to a child, results from inattention. If traffic officials do not like my bright ideas, then perhaps they might try something to take the edge off some very fast traffic.
Posted by S-townMike at 5/30/2005 10:30:00 PM