Via Mike Peden, a February Planning e-mail that indicates CM Buddy Baker understood an alley abandonment issue and rezoning request to be more directly connected than he claims to now: 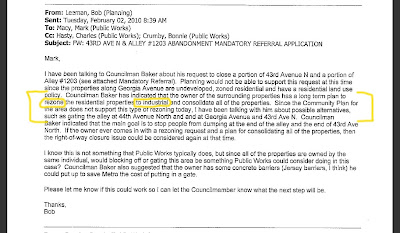 At his community meeting on Saturday, CM Buddy Baker denied the connection between alley abandonment and rezoning. The 43rdrezoning website has video. Here's an excerpt of CM Baker's comments that contradict Metro Planning's construal of his support for rezoning:

I find CM Baker's appeal to ignorance disingenuous. I've observed the planning and zoning process for some years, and I believe that council members do not bring rezoning requests forward in the face of public opposition unless they support them themselves. Rezoning does not go forward on Mr. Hunter's initiative alone. It requires CM action. And if CM Baker did find out about it last minute, why didn't he put the brakes on and plan community meetings?
Almost on cue after CM Baker mentioned Mr. Hunter, the attorney for Mr. Hunter, former Chamber of Commerce lobbyist, and Board of Zoning Appeals member, David Ewing, interrupted and took the heat of community questions off CM Baker. He insisted in spite of his client's wishes to rezone industrial that the motive behind the alley closure was to clean up the alley because "Metro is not doing that well."
There was a time in Salemtown when we were having trouble with Public Works not maintaining our alleys well. Abandonment never even entered the picture. We just assumed that if Metro wasn't doing something well, then we would work to compel Metro to take care of the alleys, which they eventually did. It seems a lawyer's trick to use poor Metro service delivery to justify privatizing an alley, which increases the probability of rezoning in the future. Metro Planning opined that themselves.
But the lawyer overplayed his hand by insisting that those who chose to participate in this community meeting could only ask questions about whether the alley should or should not be abandoned. He has a responsibility to represent his client, but he has no authority in the forum
to terminate questions about rezoning, especially when his client, the business owner, initiated the rezoning process.
Attorney Ewing also oddly declared CM Baker's community meeting closed and out-shouted a community opponent around minute 39:00. Who put him in charge? He won't be able to alter public perception that rezoning remains the long-term counterpart of short-term alley abandonment. The huddle of CM Baker with the business owners' lawyers at the end of the video is emblematic of what is wrong with the planning and zoning process. It often defies democracy.
Posted by S-townMike at 7/18/2010 11:27:00 PM