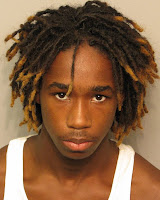 A court witness describes Donquise Alexander, the 14-year-old charged in the shooting death of 14-year-old Vincent Lewis, as a gang member and runaway. According to the witness, Lewis was a rival gang member and drug peddler, which is not the picture previously painted as a kid working honest jobs for relatives to save up for a car.

Details emerged during a Wednesday hearing for the teenage boy arrested in the July 8 slaying of Vincent Lewis Jr.

A 13-year-old witness testified in Juvenile Court that the teen was a member of the Crips gang, had run away from home and planned to rob Lewis, a member of the Bloods, who sold marijuana.

As a group of boys smoked marijuana, the 14-year-old pulled a 22-caliber rifle on Lewis, told him "come out of your pockets" and hit him over the head with the gun, the witness said.

The witness, also a member of the Bloods, said that although they all were members of different gangs, they were friends, and the suspect did not intend to kill Lewis.

Metro Police Detective Deniz Ismailovic said Lewis was shot 10 times in the leg, stomach, hand and head. Police found the gun nearby, wrapped in a Titans blanket, beneath cinder blocks.

Up until this shooting, the teen gang problems of Salemtown's past has been receding over time. It is worth noting that the suspected perp is a runaway and the victim lived in East Nashville. The crime in this case came in from outside.
Posted by S-townMike at 8/04/2010 09:29:00 AM