Mayor Karl Dean left for Japan today. What part of that trip is essential given earthquakes and tsunamis?


Common sense dictates that, after the 5th largest earthquake in international history hits Japan producing destructive tsnamis and causing the declaration of emergency at 5 different nuclear reactors, travel to Japan at this time might not be the wise choice. But you do not even have to have common sense. The US State Department advised American citizens to avoid "non-essential travel" to Japan today.

After I learned that Mayor Karl Dean left on an economic development mission trip to Japan this afternoon, my first question was: what makes a Nashville Mayor so important to Japan that he can do what so many people around the world with more stakes in the game than Karl Dean cannot do, get a flight to Japan? My second question was: is pursuing economic development for Nashville in Japan too much too soon given that we do not even have a handle yet on the magnitude of the disaster or on the demands of relief?

Since the travel advisory was issued, my question is: is Karl Dean's trip to Japan essential? Would the Mayor's Office have lost anything by just waiting and flying there after Japan is back on its feet?

UPDATE: Tennessean reporter Michael Cass erroneously tweets that the US State Department's travel advisory was issued Sunday, March 13 even though the screen shot above shows that it was issued the day the Mayor flew out of Nashville. 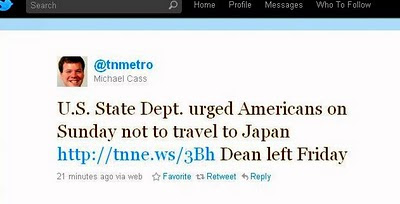 ABCNews reported that the State Department issued the advisory on March 11. An Enclave reader also sent March 11 links from the US Embassy in Japan and to a US State Department briefing showing the same.

The maddening aspect here is that the local press asked no questions about the timing of the trip beginning on Friday, given the well-publicized travel advisories. They seem to be just repeating whatever the Mayor's Office feeds them with no follow-ups. Then a reporter unabashedly misreports the date the travel advisory was issued, which has the effect of rewriting history given the extensive reach of corporate journalism. This is either lazy or beholden or co-opted journalism.

UPDATE: After getting a tip that Mayor Dean had taken his family to Japan, a fact that I had not seen reported over the weekend by any local news source, I tweeted a request for confirmation earlier today. Shortly afterword, Tennessean Nate Rau reported on Twitter that Dean spokesperson Janel Lacy confirmed that the Mayor's wife and two daughters accompanied him to Tokyo. Since Japanese officials are paying for Karl Dean's family members to come with him, the issue here is not the cost of taking his family.

There is an issue however with the fact that, while Americans abroad are feeling encouraged to leave Japan (and many are landing in Hawaii), the State Department's travel advisory against non-essential trips is disregarded by this Mayor's Office. Even if Dean supporters can make a case for the Mayor's trip being essential (still a debateable claim), in no wise can they make a case that his wife's and children's presence in Tokyo are essential to the economic development mission.

It appears that companies the Mayor will visit have their own disaster distractions to deal with. I still do not understand why this trip could not have waited.
Posted by S-townMike at 3/11/2011 10:22:00 PM