Curiously, over 2 months ago the blogger for the public-private partnership between Metro Nashville and The Land Trust for Tennessee teased us into expecting an open space plan by the end of January. 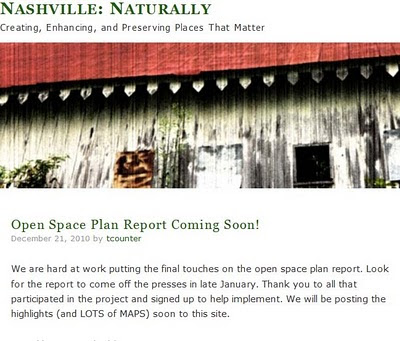 After conducting a bit of online research, I am unable to find indication that the report was ever published. If anyone out there has details on the report that I'm missing, please share them.

A news search for the open space plan since last August only turned up a reference to it in a Tennessean blog with a rather interesting mention of one of the Mayor's part-time hires:


[Rich] Riebeling said [Jim] Fyke’s job grew out of a conversation they had over dinner one night last year as Bredesen neared the end of his term. The finance director asked, “What are you going to do?” Fyke replied, “I’d like to work some.”

Riebeling said he eventually concluded he “could use some help,” so he asked Fyke to work on the city’s open-space plan.

So, is one of Mayor Karl Dean's higher visibility public-private partnerships in limbo and thus in need of Mr. Fyke's bureaucratic aid? Or was the timeline for completion of the open space plan interrupted to give the lavishly paid part-timer ($64,000 salary to supplement $68,000 in pension income) a job?

By the way, the open space plan is supposed to be jointly funded by Metro ($151,000) and the Martin Foundation ($124,000). I'm not aware of any itemized reports on spending out there yet.

This is all kind of curious to me given that Karl Dean's Green Ribbon Task Force, which gave flight to Metro's partnership with The Land Trust, is often played up in the news media as a feather in the Mayor's cap. Right now it seems to be keeping Jim Fyke earning some walking-around money.
Posted by S-townMike at 3/04/2011 09:39:00 AM