I still cannot find any reports that the suspension of CM Jerry Maynard's law license has ended. Not long ago CM Maynard expressly and in no uncertain terms told his fellow council members during one of their business meetings that he was no longer practicing.

Yet, he seems to have no reservation calling himself a lawyer on his re-election website, and he indicates that his practice is characterized by integrity while neglecting to mention the ethical misconduct questions alleged about him:

....Inspired by Supreme Court Justice Thurgood Marshall and the impact an attorney of integrity could have on a community, Maynard chose law as his profession. He earned his Bachelor of Arts and Doctor of Jurisprudence from Indiana University, Bloomington, Indiana..


Disclosing the charges of misconduct and his suspension may not help Jerry Maynard get re-elected, but they would reflect a level of transparency that could at least be respected. This Maynard campaign habit of playing up his legal career at the expense of the unethical dimensions continues to trouble me.


UPDATE: An Enclave reader has confirmed that CM Maynard is still under suspension and not practicing law by going to the Supreme Court's Board of Professional Responsibility website. Click on the screenshot below to enlarge the record. 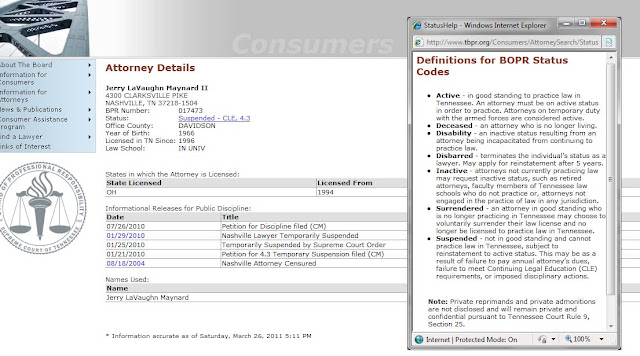 If the Maynard campaign is going to continue to refer to their candidate as a "lawyer" the should refer to him as a "suspended lawyer."


UPDATE: An Enclave commenter points out that Mr. Maynard's website may be a violation of his suspension based on the rules of the suspension:

after February 25, 2010, Mr. Maynard shall not use any indicia of lawyer, legal assistant, or law clerk nor maintain a presence where the practice of law is indicated


Now I'm more than a little troubled. Mr. Maynard would risk violating his suspension to score some re-election points?