Yesterday evening a little after 5:30 an email notice went out from the Occupy Wall Street (Nashville chapter) protesters warning:

Occupy Nashville has been told it must vacate Legislative Plaza druing the nights starting at 8pm tomorrow (Thursday, 10/27), although they had earlier agreed that Occupy Nashville had 1st Amendment rights to stay there.

Today Republican Governor Bill Haslam announced to the news media that OWS protesters have until 10:00p to vacate the Plaza, a public space. The Governor has instituted an unprecedented 10p-6a curfew rationalizing "criminal activity and deteriorating sanitary conditions" as appropriate causes. Haslam declared an "occupied" Legislative Plaza as "unsafe for the protestors, state employees and everyone who works, lives and enjoys downtown." A local micro-blogger responded by tweeting that a small group of dissenters has caused Governor Haslam to overreach and declare a state of emergency.

It is clear from the photo of the protesters above that they are more of an annoyance to the chamber of commerce than a threat to the public. While I have questioned protesters' decision to occupy Legislative Plaza for other reasons, it is obvious to me that Bill Haslam and his GOP cohort are using the occasion of other crackdowns around the country to make a rag-tag group disappear. You had to know that unconstitutional suppression was coming because Tennessee's wealthy, political elite are tired of tolerating the unwashed and the uppity. This curfew and permitting process are designed to destroy the dissent of people who are already shut out of the halls of power.


UPDATE: Here's a photo from a visit I made to the Occupy Nashville camp a couple of weekends ago. There were not many campers around, but their ambitious democratic declaration was posted on modest cardboard at the camp entrance. 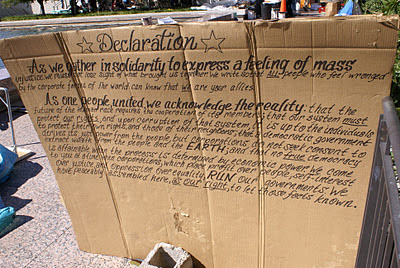