A Jane's Walk in Nashville 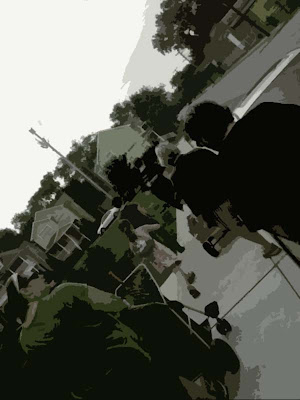 Some Salemtown leaders organized the first Jane's Walk in Nashville on May 5 in North Nashville. We joined groups in over 30 communities across America who marched to honor one of the more influential activists in community-organizing and urban-planning history. Because of the high chances of rain, short notice and some no-shows our group was of modest size, but we traveled from Morgan Park on 5th Avenue North to Bicentennial Mall State Park on Jefferson Street and 6th Avenue North, where we had a picnic and even managed to chat about Jane Jacobs' legacy for community-based planning and walkable neighborhoods. There was also a frank discussion about the vehicular impact of a Sulphur Dell ballpark on North End neighborhoods. Eventually, the focus became activities for the kids who made the trek too.

On the way home, we waited over 5 minutes to cross back over Jefferson Street, as traffic flew past us at dangerous speeds. And when some drivers did eventually allow us to enter the crosswalk other drivers did not immediately yield, but sped up to try to beat us through the crosswalk. One driver yelled at us to get out of the street. It was a glaring example of how automobile-oriented growth destroys accessibility and complete streets. It expressed Jane's lessons on the irony of building bigger roads that reduce options for other modes of travel and that merely attract even more dangerous car traffic. There is little on Jeff Street between Rosa Parks Boulevard and the Cumberland River that dampens speed or lowers the volume of cars. Sidewalks along that area are narrow and place pedestrians frighteningly close to speeding automobiles.

It was a modest effort, but from small things big things one day come. Hopefully, Jane's Walks in Nashville will grow in future years and bring more attention on the need for complete, welcoming and thoughtfully-planned streets.
Posted by S-townMike at 5/07/2012 10:56:00 PM