Update on problems Velocity homeowners are having with adjacent businesses

A couple of months ago I blogged on the problems that the Velocity Homeowners group was having with noise from Bar Louie Nashville construction and the potential for the first-floor establishment (whose late night hours run through 2am) to keep homeowners up because of the placement of music speakers. Bar Louie opened last week so I checked in with their online community to see how things have been going.

Despite assurances they received from Bar Louie brass, the construction noise reportedly continued to intrude on the quality of life of members of the Velocity community. A couple of owners reported that construction set off fire alarms for long periods of time during the day. One owner felt the need to pull the alarm in his condo out of the wall. Another owner reported that construction noise in late April repeatedly started at 6:40am, and she encouraged the group to call Bar Louie's Director of Communications, Chad Apap. There was also a report that Bar Louie's invitation-only "soft opening" resulted in noise coming through some condo floors and walls. However, the business did not generate the noise expected at its official "hard" opening on May 21. So, perhaps things are beginning to look up at Velocity. 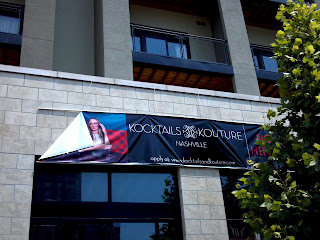 Meanwhile, a separate business, Kocktails and Kouture [sic], violated Velocity rules by hanging a banner from the balcony of a resident living above it. The resident reported that crews secured the banner ropes to her property with rusted metal anchors, which have already defaced her balcony. While she admits she does not see the problem as huge, she also is concerned that the boutique's owners did not ask her permission. Moreover, she expressed opposition to the idea that businesses in the mixed-use development may be held to laxer standards than residents are held to. One member of the Velocity group replied to her concerns by suggesting that she charge Kocktails and Kouture 20 bucks a day to rent her property as advertising space. That is a stroke of genius.
Posted by S-townMike at 5/27/2012 12:23:00 PM