Tonight's Midtown transit "open house" or "workshop" (or whatever officials are deciding to call it at the moment) nearly busted out into a full blown public hearing on the east-west connector after one person in the audience asked an Amp engineer who was finishing up at the podium if he would take questions from the floor.

The citizen expressed his opinion that he did not think that projections could be correct based on his own experience with metro transit. The engineer moved to the fellow and started answering his questions as if they were having a one-on-one, and someone else in the crowd spoke up and asked the engineer to use a microphone so everyone could hear him. The engineer declined to grab the mike and expressed his own wish that all questions be expressed at the tables.

I wondered why he seemed resistant to fielding some crowd questions before turning to the tables. As I saw it he could have answered and parlayed the group to dispersing more diplomatically without seeming so bent on individual conversation. If the reticence to discussing these issues is about controlling the rabble, it really does hit me the wrong way.

In the meantime, a third attendee spoke up and encouraged others present to go to Cleveland and see "the mess" that a similar system is there. Pitchforks were starting to emerge. Meeting organizers seemed on the edge of losing control to the masses.

But there was a lull, then some aside chatting, and before anyone else had a chance to take the floor, engineers regained control and got those in attendance to the tables where different members of their team could manage expectations.

In the meantime, people were still trying to get into the main room, but the crowd was stacking up in the hallway and out the front door. I actually left 20 mins into the meeting because I felt guilty about taking up space when I had already attended the East Nashville meeting. I asked one member of the design team whether they were expecting this many people. I learned that they were not either tonight or in East Nashville the night before last. I joked with another official as I was leaving whether the number of people in the building was a fire code violation. The reply: "I plead the 5th". When I got outside to my car, there were yet others walking through the parking lot to the building and I saw several cars circling and stalking potential parking spaces. As soon as I backed out one of them grabbed mine.

Before I left I heard interesting things. First of all, the engineer at the podium said with emphasis, "In no way are these final designs, yet". I do not recall him saying that in East Nashville. If he did it was not with as much verve or I would have remembered it. Whether he felt like he did not need to make the point across the river or whether this was an attempt to be more measured, he left himself wiggle room to refer to this stage as a "visioning" process. Although again, even if a final stage is "only" 30% complete, a good part of the vision seems already achieved. Haggling over the details at specific intersections does not seem like "visioning" to me. 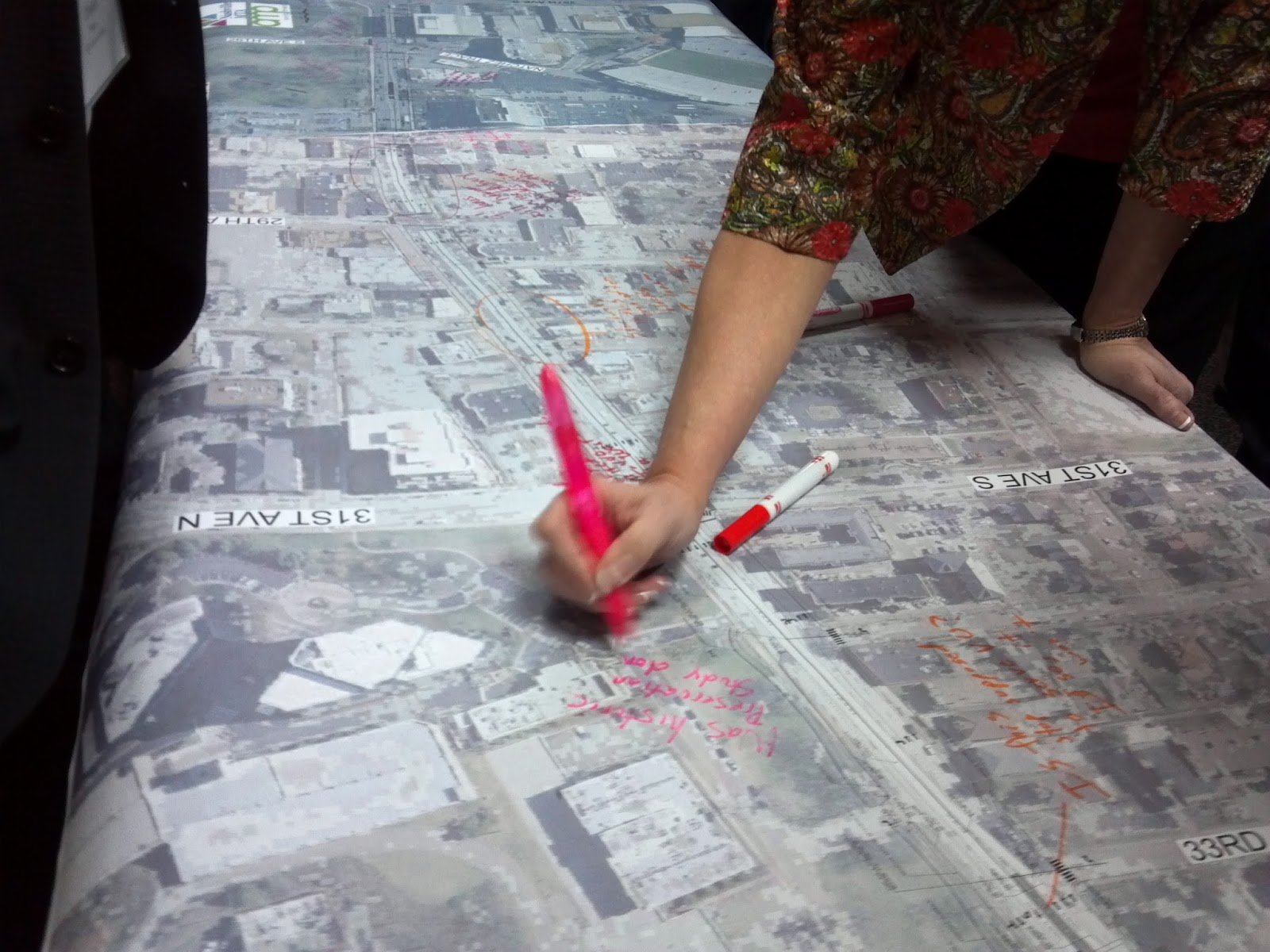 I heard many more concerns expressed at this meeting than in East Nashville, particularly about where bus riders would park around West End, whether 5,000 riders per day with Amp was believable, whether historic preservation would be endangered by infrastructure changes and whether adding extra lanes would create more snarl. I was in earshot of a woman who exclaimed that, given the current parking situation along West End, there was absolutely no way that riders would be able to find parking to catch the bus. I heard one design team member tell one concerned transit rider asking for ridership comparisons to projections that he did not know what the current daily ridership was.

As I left, I noticed a police officer who seemed to be letting people into the room as others like me exited early and I wondered, with this much unexpected popular response to a transit proposal, pro and con, should not the public meeting process have started long ago with honest communication so that we would all not be so caught off-guard now? More specifically, why weren't we permitted to "vision" long before the transit authority reached 30% of the final stage of the project? 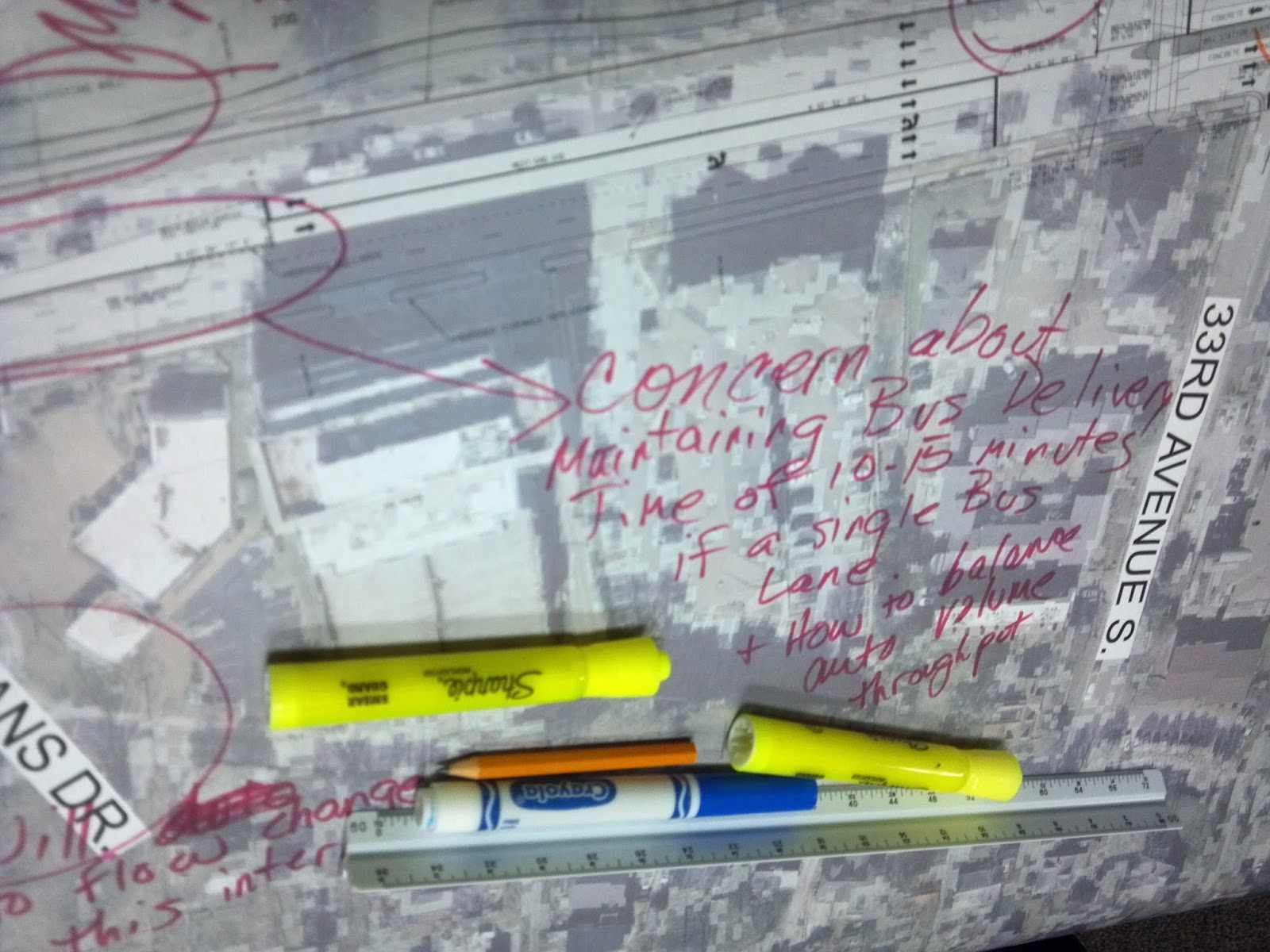 UPDATE: Rather than simply reporting the news, the Tennessean is resorting once again to bias by speculating in their report about how many green and red reps attended. Just like in East Nashville, most of those I saw in attendance had no form of pro or con signifiers displayed, so why does Brian Wilson feel emboldened to say that there was "balance" between pro and con? Did he interview every single person? I doubt he will share his method of counting, but it cannot be very scientific. There could have been many different points of view beyond simply polarized opinions, and it really is unfortunate when the news media fabricates "facts" instead of conveying them.
Posted by S-townMike at 1/15/2014 06:00:00 PM