This evening Mayor Karl Dean is holding his soiree (today shutting down 4th Avenue and two state parking lots) to break ground on his new underwhelming ballpark for the Nashville Sounds. He has ordered infield dirt and home plate be set up on 4th, about a less than block away from where the new home plate will likely be. Fittingly, home plate is facing the wrong way. It is a metaphor for me on how this process has started on the wrong foot. Token, purely symbolic attempts were made to invite community buy-in. If this project starts going pear-shaped with cost overages or construction delays, Hizzoner and a few North Nashville council members are likely going to regret not getting more popular support before moving forward. 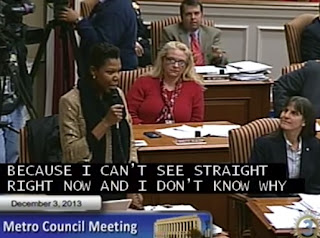 Likewise, you ask questions about the Mayor's ballpark and the process he undertook to make it happen in less than 6 months, and your love of baseball is questioned. (In some cases the invective is uglier). What is particularly troubling is when the meanness is expressed in emotional moments by your own council member, whose public comments seem to suggest that she only considers the emails of supporter of projects that she supports. It may be, as Erica Gilmore argues, "a strange kind of love of baseball" that insists that Metro government be accountable to constituents for its capital projects even when they involve the national pastime, but to question people's deeply held devotion to something when you cannot even seem to spell correctly the name of the ballpark whose history you claim to be celebrating in your new capital project smacks of hypocrisy. Questioning someone else's love of baseball or history when you don't seem to have a grasp on either yourself amounts to being the bad sport.

For her love of the game, I'd be interested to know whether CM Gilmore has put her deposit down on season tickets in order to financially support the new ballpark she claims will "revive" Jefferson Street.

That is merely one of the questions I have going into this afternoon's groundbreaking. They deserve answers, not more hyperbole. Has the Mayor done the work on examining the area for archaeologically sensitive sites? Has soil analysis been done to test for contamination? Where will any toxic soil be dumped? What is Mayor Dean doing to protect historic buildings nearby? What will we do about traffic and parking? What are contingency plans for future catastrophic floods? There are a host of other questions I have heard asked that have yet to receive answers. Rather than lashing out at people who ask questions like this, rather than impugning their motives the Mayor's Office and its minions in Friends of Sulphur Dell should offer clear answers. This is baseball. It concerns our neighborhoods. We deserve more than tempestuous politics.


UPDATE: The Associated Press in a story on today's event repeats a meme that a new ballpark will end the 50-year-old deterioration of Jefferson Street. It also makes a claim that I have never read before: that Sulphur Dell was demolished due to the construction of the interstate, which is a dozen or so blocks away from the old ballpark site.

Nashville Mayor Karl Dean and the Nashville Sounds baseball team are hosting a ceremonial groundbreaking for a new minor league ballpark that will return Nashville baseball to its historic home.

The new park in Sulphur Dell will be near the site of an old downtown ballpark that was demolished more than 40 years ago to make way for an interstate and redevelopment. Those changes cut off the historically black neighborhoods of North Nashville from downtown, helping to drive those neighborhoods into an economic slump.


It looks like whoever wrote this piece is drawing information from a December report which made the debatable claim that our community "never recovered" from demolition of Sulphur Dell and the construction of the interstate.

The Tennessee Tribune offered a contrasting point of view to the AP last year:

“The interstate was only the beginning of the problem,” said Janice Jones, a retired nurse who lived in North Nashville for 55 years. “These hooligans moved in and starting committing crimes. It used to be safe here 40 years ago. Black folks were supporting each other and businesses were thriving.”

Jones paused to collect herself. “Now they’re over here killing each other and abusing drugs. It’s ridiculous.” Kassir agrees. “We showed unity back then. We supported each other. But somewhere in the years after segregation and Civil Rights, we lost our way and turned on each other. This neighborhood hasn’t been the same since.”


I am sure that the Mayor's Office has no problem with the AP notion that a ballpark may save Jefferson Street neighborhoods after 50 years, thus making Karl Dean our superhero, but the facts and the truth seem to be more complex and nuanced. And the Mayor has not been attentive to North Nashville as a rule of his two terms.

As far as I can tell the folding of the previous minor league fanchise had more to do than the building of the interstate with the demolition of Sulphur Dell. And to claim that in 50 years Jefferson Street neighborhoods have done nothing but decline is blind to reality. The AP should get a grip and stop inventing news.
Posted by S-townMike at 1/27/2014 09:21:00 AM