My takeaway from last night's East Nashville Amp meeting: they ask for your input, but then want you to go away 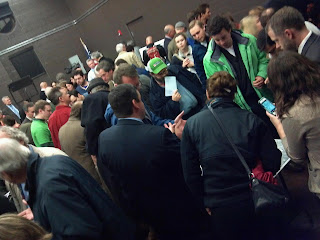 Oh, the contradictions. Last night I attended the East Nashville public meeting on the Mayor's proposed east-west rapid bus transit connector held at East Park community center. I expected a major PR push without cracks or holes for this series of January meetings. The Chamber of Commerce, the beast hauling Karl Dean's transit bid, hired pro flacks and so I expected more than this:

So, I sensed a split-mindedness in last night's meeting: Metro wants you to give feedback, but then go away. Or maybe they want you to give the feedback that fits with engineers' final design, which was laid out on four twenty-five foot tables. How can this be a visioning process when the design is staring back at you in the face from humongous blueprints? Unless the only public vision that will count is that which is already laid out?

The old proverb, without vision the people perish, applies to North Nashville in this case. There was no accommodation for someone in the audience like me, who believes that BRT would work in North Nashville, to envision the Amp for us too. All an engineer could have said to me over his huge map of East Nashville was that North Nashville could not be addressed in this mass transit plan. No kidding. Any of us who came to this community meeting thinking that we would could make a difference in transit equity were rendered invisible. The vision of the Mayor's rapid transit minions can only extend so far. They are blind to the rest of us.

But we're not the only ones. Transit representative Holly McCall (who also represented Karl Dean on the Music City Center) told the audience that business owners were invited to speak with engineers about their concerns for the line that would run by them. The meeting seemed more focused on businesses, which is not atypical for this Mayor's Office, although it is clear that Mr. Dean is getting resistance to Amp from the business level. But what about residents? What about residents of Cayce Homes public housing? This line hardly serves their needs. Again, it is an artery laid out to drive up the real estate values of wealthy property owners and to serve Nashville's largest corporations. Is it really a "community" or "public" meeting when invitations to share are made to business leaders present? 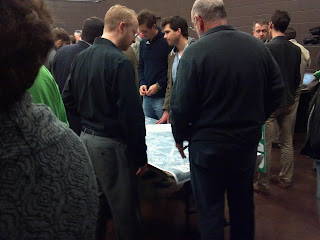 If this had been an authentic charrette, all stakeholders present would have participated in a small group process of working through differences and reaching a consensus. But the meeting was too much open house in which the public was invited by the Transit Authority to view the way things actually are. People were encouraged to write their comments on sheets of paper and turn them in. That is no replacement for a charrette, and it is certainly a less accountable means of encouraging public input.

I am under no delusion that the Amp suffers significant opposition in East Nashville. Once the bus line was extended there in order to draw more support, the Mayor effectively divided and conquered organized grassroots opposition to sending rapid transit up West End. It is common sense to assume East Nashville supports rapid transit for themselves. But to claim as the Tennessean has this morning that supporters "largely outnumbered" opponents on the basis of counting green shirts against red ones is misleading. Far outnumbering green and red shirts were shirts that did not announce any position on the AMP.

Nonetheless, I was in earshot of an Amp supporter who complained that the media was interviewing a couple of red shirted opponents in the room, thus, he speculated, creating an impression that opposing turnout was on par with supportive turnout. I stood there thinking, "How can you judge from this crowd of clothes who stands for what? I oppose the Amp, but you cannot tell from what I am wearing." (I had a green pullover on). And what is someone who is neutral or otherwise unsure supposed to wear? How many of those people were there and individually counted by the news media?

As I walked from the meeting to my car I chatted with a woman I don't know. She asked me how I thought the meeting went. She asked me whether I thought our feedback mattered in the plan. I replied that they did give us these comment forms to express our feedback, assuming they would indeed read them and permit input to influence the plan. She told me straight up that she did not think that the feedback mattered because this east-west connector is exactly what Karl Dean wants. We both seemed to agree that in the end Hizzoner is most likely to get what he wants and that these "public" meetings are publicly pointless.

UPDATE: Because of parental responsibilities I could not attend the Downtown public meeting on Tuesday evening, but there are indications in the Tennessean (which did not resort to the same useless t-shirt counting of their previous report) that the same questions I have were expressed by some in attendance:

Several project skeptics angry with the broad contours of the bus line were just as critical of the public meeting’s format, which was largely an informal question-and-answer period during which people could talk one on one with the project’s engineers.

Questions aside, the manner in which developers went about the plan annoyed Nashville resident Michael Rogers.

“They’re going up there and making it seem like a done deal,” Rogers said. “I just feel it doesn’t build trust.”

Because so much of the development remains in flux, whether from the amount of federal and state funding to the planning that still remains, there wasn’t much that could be gained from being there, said undecided downtown resident Julie Lammel.


One of the other regrettable impressions that this project's boosters keep trying to create is that the east-west connector is merely the first step in a long process of regional growth. Those are empty promises at this point with no guarantees, especially with Karl Dean's mayoral tenure coming to a close. Nashville's dustbin is filled with well-intentioned capital projects that never materialized.

If built the Amp is just as likely to be the only leg of beautiful BRT in Nashville, serving the wealthier segments of our county while continuing to neglect others. That prospect would be more consistent with local history.
Posted by S-townMike at 1/14/2014 08:13:00 AM