Civil rights not quite enough for Cooper?

Always anchor our external direct action with the power of economic withdrawal. Now, we are poor people, individually, we are poor when you compare us with white society in America. We are poor. Never stop and forget that collectively, that means all of us together, collectively we are richer than all the nations in the world, with the exception of nine.

Conservatives never seem to fail to express themselves awkwardly toward Martin Luther King, Jr. and the Civil Rights Movement. We have seen it before among red-state Republicans, but it is no less true for Blue Dog Democrats. Nashville's Jim Cooper reportedly attended a local law firm's annual MLK fellowship breakfast today and asked one of Dr. King's comrades the following question: 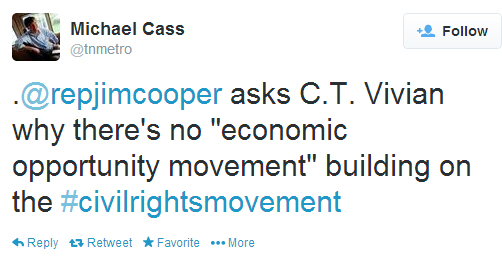 What I hear driving questions like this is the Blue Dog assumption that market-based principles generally provide solutions for social problems better than government action does. The fiscal conservativism at the heart of the logic of Democrats like Rep. Cooper ideologically dresses down every other priority. Hence, "economic opportunity" is code for never binding an economic system that hums along on inequality, on inequities, on profound imbalances of power and influence, wealth and privilege, because the market fixes everything if allowed to.


To tell the truth there was rarely the bifurcation in the Civil Right Movement between economics and politics that Jim Cooper seems to be insinuating in his question. In fact, black history is filled with attempts to advance economic opportunity beyond the movement that showcased Dr. King's work, but that is a subject for another time.

The question of economic opportunity for people of color and poor people runs like a distinct thread through Dr. King's speeches and writings. All Rep. Cooper has to do is listen to or read them. Take the last speech MLK gave before his death on behalf of 1,300 striking sanitation workers in Memphis. The last half of that speech has two primary expressions. One is well known because it is recited over and over due to the tragedy of April 4, 1968: Dr. King tells his audience that despite threats, he does not fear anyone because he has been to the "mountaintop", looked over and "seen the Promised Land".

But the second aspect of the second half of that speech contains express appeals to the people's practicality and economic power to make the changes necessary to bring them greater freedom. Dr. King encourages them to stop buying Coca-Cola and Wonder Bread. He tell them to quit the banks of Downtown Memphis for ones that treat workers more equitably. He mentions black-owned insurance companies that would be more worthy of his movement's money than white ones.

His last speech prescribes economic opportunity. It expresses solidarity with underpaid, mistreated city workers. It constitutes a jeremiad against the city of Memphis and its mayor, who prohibited a union, refused to raise wages and allowed African-American workers to toil in unsafe conditions. The only way you could insinuate that this civil rights speech is not about economic opportunity is to ignore the speech (as well as every other speech that gives this one broader context).

I was not at this morning's breakfast, so I do not have knowledge of everything that Rep. Cooper said. Tweets are notoriously unreliable, even when posted by a pro journo, for judging comments in their entirety. However, I do understand the flawed Blue Dog logic. I have also been exposed to political hemming and hawing about Dr. King's beliefs, especially in January when it is politically expedient to seem pro-MLK with no strings attached.

However, when Metro Nashville Schools destroyed its custodians union by outsourcing service work, we did not hear a word from fiscally conservative Jim Cooper. Some might argue that collective bargaining is a civil right. Regardless of that question, others prey on my mind: does Rep. Cooper believe that cutting and outsourcing school custodians gives them greater economic opportunities? Does he believe that Dr. King was not striving toward economic opportunity for sanitation workers by standing by their strike? If we honestly strive to be like MLK, shouldn't we stand by unions in their hour of economic need?

The Civil Rights Movement did not need an economic opportunity movement to complete it. It was always about economic justice as much as it was committed to nonviolent dissent and political reform. It supported unions who fought for greater economic opportunities. For any Democrat to insinuate that it was incomplete without the Blue Dog brand of snake oil is in poor taste on this Martin Luther King, Jr. holiday.

Arguably, the Blue Dog could have done worse. At least Mr. Cooper did not hijack the commemoration to pimp a new bus rapid transit plan.
Posted by S-townMike at 1/20/2014 11:35:00 PM