I know that some conservatives (by "some," I mean "very few") take issue with subsidizing pro sports venues period. I do not take issue with the idea of subsidizing ballparks. What I have tried to get across in my reflections on ballpark subsidies is that if a government by the people is going to give private developers and team owners millions for new sports parks, then those parks better have public access and common goods commensurate with the free revenues the sports barons enjoy.

In most cases, and specifically in the case of the new First Tennessee Park for the Nashville Sounds, they do not. The Sounds owners are playing up their services for Nashville's rich: luxury suites, "personal" servers, the "private" club level, and "exclusive access" bars. Even the best field level seats are set at a luxury price and emphasize the networking executives can do.

Private, exclusive access? Funny, but I thought such access was what any ticket, regardless of price, guaranteed you. The idea that seats purchased at the club level with luxury boxes are more private than the purchased seats farthest away from home plate strikes me as redundant, unless by "private" the Sounds owners are referring to activity they hope to shield from transparency to other ticket buyers. I am keeping in mind that the property is owned by Metro, leased by the baseball club and is technically public.

A Wisconsin professor (who had conducted research on the Sounds old parent club, the Milwaukee Brewers) explains that the sports culture is completely different than it was a half a century ago when elites rubbed elbows at professional sporting events with working class people.

The problem Sean Dinces sees it that while we continue to expect more public tax dollars to be doled out for ballparks and stadiums, we also watch team owners accept that money as entitlement as they systematically exclude most of the taxpayers from whence the money comes. The problem starts with luxury suites, which "make fans inside them feel superior and those on the outside feel inferior."

He argues that liberals need to step up their game:

rather than bringing residents together, and rather than functioning as legitimate public goods, the current generation of publicly funded stadiums systematically exclude an unprecedented percentage of American sports fans.

Of course, decisively rebuking the rhetoric of teams and leagues will not, in and of itself, solve the problem. This is especially true in a day and age when decisions about stadium subsidies have been largely removed from the democratic process, and when franchises continue to wield threats of relocation like a sword above the heads of residents and municipal officials. Nevertheless, reshaping fans’ consciousness is a necessary starting point.

Ideally, fans should see an intractable antagonism between the potential of spectator sport as a community asset and its current role as a venue for taxpayer-funded consumption by a handful of urban elites. Critics must also stress that, despite what leagues want us to believe, fandom is not necessarily contingent on having a stadium — or even a team, for that matter — close by, especially when attending actual games is unrealistic.

In the short term, transforming this consciousness raising into effective resistance against the sporting arm of the real estate business requires wresting fiscal control away from politicians competing to offer teams ever greater sums of state, county, and city money. This means making anti-stadium-subsidy campaigns part of bigger struggles for social justice in cities, like the rise of a new radical unionism in places like Chicago or recent electoral successes by socialists in urban centers, such as Seattle.

The games will go on even if the handouts do not.


I have demonstrated on this blog over and over that throughout the planning and building of a new ballpark in the North Capitol area, people have been excluded from the political process by the Mayor, the Metro Council, Metro planners and the Sounds ownership. Just take a look at my past posts on the subject. Liberals in Nashville have failed to step up their game when it comes to challenging the logic that urban elites have exclusive rights to influence and benefits in what is a process and a real estate deal that was funded overwhelming by tax dollars that we have paid.

In my opinion, unless there is some liberal groundswell to challenge business as usual in these deals that serve "the sporting arm of the real estate business," we are only going to watch more and more people excluded from public enjoyment of the local professional sports scene. The next ones in line to get the shaft are the local baseball fans, many of whom have already been grumbling about the higher prices of Sounds' season tickets. Given that their tax dollars are supporting an ownership group that drives up prices regardless of the latter's windfall wealth, their grumbling is justified.


UPDATE: In May 2015, the Sounds engaged in a league contest to promote the "Best Seat in the House" in the minors. What seat did they nominate for best seat to vote for? Seats that most of us will never be able to sit in: the "Field Level Suites," which the club calls their "most luxurious and exclusive entertainment area." 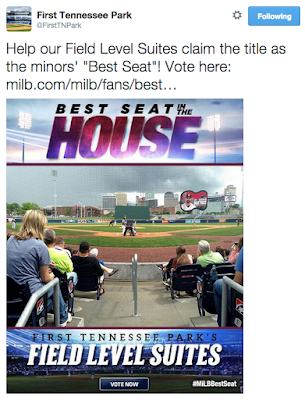 The irony is thick in this one. Proverbial beauty contests depend on popular votes. To be popular means to appeal to the masses, not the elites. Yet, only elite groups of people can afford to sit in the ballpark's "most luxurious and exclusive" seats. If you're one of the $9.00 ticket holders on the left field berm, how is voting for the Field Level Suites in any way appealing to you?
Posted by S-townMike at 2/01/2015 04:57:00 PM