Seriously not too serious

Except that CM Evans apparently takes Twitter seriously enough to organize her expressions by discipline. It's not yet decimal classification, but apparently her intent is to steer her audience to a relative index of ideas that are clearly (or not so clearly) "finance" (vs. "local politics," which is the subject of a separate Twitter feed). If the audience strays outside the Belle Meade council member's classification system, they may get a scolding: 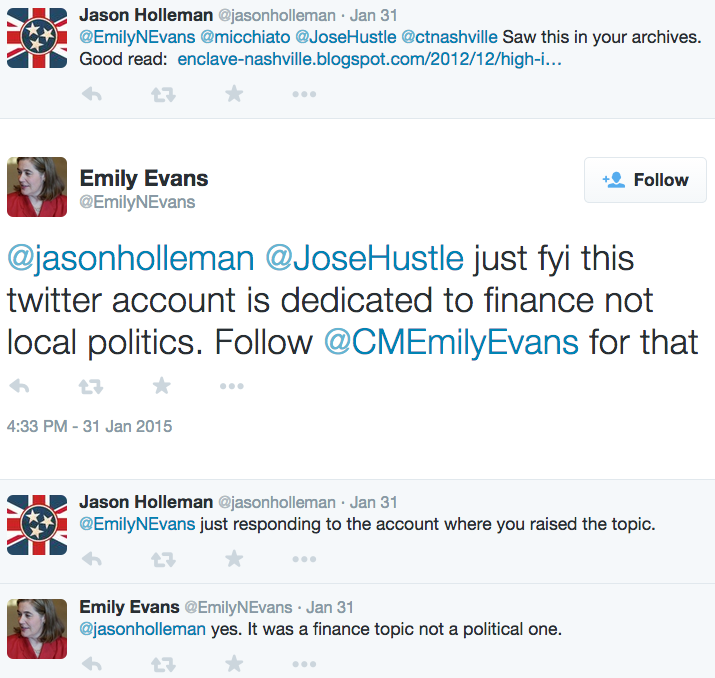 If CM Evans really wants "@EmilyNEvans" to scream "finance" rather than "politics," she might consider changing her account header photo of a TEP poster promoting political equality to something with dollar signs on it; just so that we understand the clear, unyielding structure of her various Twitter accounts. And I have to say, her "politics" account describes itself as, "I am the Metro Nashville Council Representative for the 23rd District." I want to avoid "taking Twitter too seriously," but that sure sounds more like a feed dedicated to her district rather than to general discussions on local politics. We may need clearer user instructions on CM Evans's various accounts.

Otherwise, she might consider not taking herself so seriously when someone responds to her tweets outside the lines (or inside the lines; who really knows?), thus upsetting the order of things.


UPDATE: Who's she calling "some blogger"? I didn't used to be persona non grata back when I was pinning spurious attacks to the mat and getting the word out. I guess we can chalk up the council member's indirect Twitter response to the lessons of the fealty of big shots and politicos as expressed by campaign operative Richard Jemmons in the film Primary Colors: "That's what these guys do. They love you and then stop lovin' you."


UPDATE: Just found this email excerpt from CM Evans to me dated almost exactly four years ago in which she writes a bio to be used in a panel for which she recommended me. Unlike other email correspondence from around that same time, she does not write that this was to be "off the record," so I'm assuming it is okay to quote her, especially since she is a public official. Aw, hell, what am I thinking? Of course, it is okay to quote her because these words went public in February 2011 anyway:


Mike Byrd is a resident of the Salemtown neighborhood in North Nashville. He writes one of the most prominent local blogs, Enclave, that covers neighborhood, local and regional issues. As an astute observer of Metro Government, Mike is responsible for breaking more than a few stories.

I guess it wouldn't have sounded as good in 2011 if she recommended me as "some blogger."

UPDATE: I was working through and weeding out my direct messages on Twitter and I found another past exchange between CM Emily Evans and myself that once again defies her more recent treatment of me as a trivial bete noire in the local political sphere.

Our direct messages involved me asking for her advice on a panel discussion to which I had been invited in 2010, along with a couple of other local bloggers. I obscured the names and positions of other individuals we discussed because the point I want to make is not about them but about her supportive expressions of my use of social media. Here is a redacted screen shot of the exchange:

Everyone is entitled to change their opinions of others, but since Emily Evans is out there publicly making negative assessments of what I do in social media, I intend to continue to try and balance the record with her more positive, remarkably candid comments.
Posted by S-townMike at 2/02/2015 08:39:00 AM