Here’s the issue: the fairgrounds is located two miles from downtown. It has access to all the infrastructure that you need to have a successful business growth area.

- - Nashville Mayor Karl Dean
That is the issue in more ways than the Mayor intended when he attempted to compare the Fairgrounds to May Town Center. The mayoral pitch for selling off the Fairgrounds to the highest real estate bidders (no developers are lined up yet) is the creation of 1,000,000 square feet of "Class A" office space that might attract businesses.

However, the current total of available Class A office space Downtown, just 2 miles from the Fairgrounds, is 1,050,919 square feet. Moreover, I am told that a large percentage of available square footage is sublease space that was vacated by companies that relocated outside of the Downtown market. 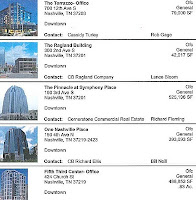 So, developing 1,000,000 more square feet of office space to the south would merely serve to tempt the flight of more businesses out of Downtown.

It would be one thing if the Downtown market were saturated by businesses. That is not the case. The irony here is that commercializing the Fairgrounds park lands would likely have the same aggravating effect on Downtown development drain that critics of May Town Center argued urbanizing Bells Bend would have. Nashville cannot even fill the Class A office space that exists in the urban core. It is not in our common interest to tear down and sell off Fairgrounds property, thusly putting Downtown markets at a greater competitive disadvantage.
Posted by S-townMike at 11/30/2010 07:53:00 PM