Nashville Neighborhood PAC drew a distinction without a difference

The leadership of Nashville Neighborhoods Defense Fund makes a point of telling us that if we really want positive change for neighborhoods, we have to participate in their mission to fund candidates for office who will pursue such change. The problem is that the NNDF PAC does not always endorse candidates who make an appreciable difference for neighborhoods. A case in point was their shilling for CM Sam Coleman (Democrat) over CM Jim Gotto (Republican) in the race for the 60th legislative district won by Gotto last week.

I do not take issue with the PAC's conclusion that CM Gotto has been unsupportive of neighborhood concerns. Jim Gotto is one of the most pro-development, growth-accommodating CMs that I know of. However, I have yet to see how Sam Coleman has distinguished himself as a progressive community advocate. As CM, Mr. Coleman:


CM Coleman also attempted to discourage opposition to a bill to allow LED signs in residential neighborhoods. Curiously, in e-mail correspondence sent to the Nashville Neighborhoods e-list, NNDF based their opposition to CM Gotto in part on the rationale that he sponsored LED sign legislation: 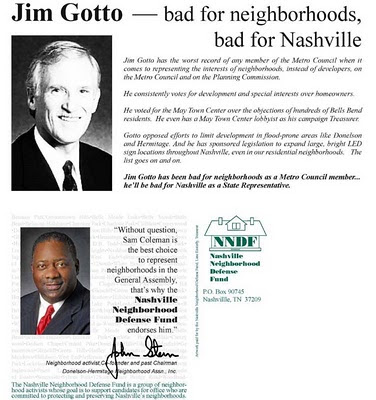 Note that the NNDF co-founder did not list a single council initiative that Sam Coleman lead in counterpoint to Jim Gotto's shenanigans.

Regular readers of Enclave remember that I have not been shy about excoriating Jim Gotto or the Republicans. But we should not buy the latest PAC scheme to airbrush Sam Coleman into something he never was just because he ran as a Democrat. I cannot think of a single progressive initiative on behalf of neighborhood quality of life that CM Coleman initiated during his tenure on Metro Council, and the NNDF endorsement is puzzling.

Another CM pointed out that the NNDF needs to focus less on negative advertising on behalf of potential allies and more on raising money and fighting for neighborhoods. I would say that if the PAC wants my support that is the least they could do. Stronger endorsements would not hurt either.
Posted by S-townMike at 11/08/2010 11:22:00 PM