Yeah, yeah, yeah. Technically, Tennessean reporter Michael Cass is correct: Mayor Dean's plan to lease out Hickory Hollow Mall for former fairgrounds expo tenants passed its first test last night by being approved on first reading. However, Cass put too much positive English on the spin by referring to it as a "major" test and by very nearly insinuating that it stood a chance of being defeated last night.

Three remarkable things happened last night that were setbacks for this Mayor, as much as the Tennessean might attempt to gild the lily or make lemonade.
I would think that opponents to the Mayor's fairgrounds redevelopment folly are encouraged by last night's events regardless of approval on first reading. If they're not they should be. They exercised some leverage over the debate and influenced events. 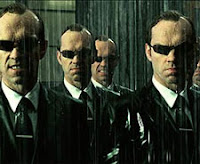 The Mayor's aura of inevitability was shaken. If you told me Tuesday afternoon that would happen I would have called you overly naive, optimistic, and deaf to the Agent Smiths of the Metro Matrix.

Organized community leaders, some of whom probably seemed rough and ragged to the courthouse gentry, were able to make the Mayor's prized pooch, the Metropolitan County Council, sit up and stray from its master in ways that convention center construction opponents could not.

Was it a fluke? Was it a sign that Nashville's overextended honeymoon with Karl Dean is finally ending? Or will the sleeping giant otherwise known as the gentrifier collective wake up and rally to Karl Dean's side? We will see how this plays out. In the meantime, I imagine that outside the usual PR the Mayor's office might be sending out about it, they are not pleased with last night.
Posted by S-townMike at 11/17/2010 12:30:00 PM