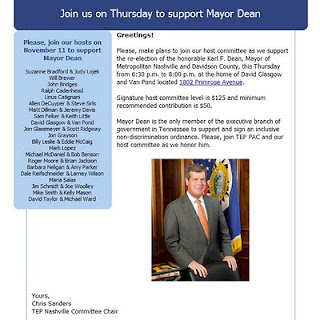 Tennessee Equality Project looks like it is veering dangerously close to be a special interest PAC without reference to progressive issues in general, without interest in broad-based coalition. They already held their first campaign fundraiser for Mayor Karl Dean, which is pretty much a signal to any progressive challenger that they would not even entertain a vote of confidence.

I support non-discrimination in the workplace but let's be clear: the ordinance sponsored by CM Megan Barry, approved by the council, and signed by the Mayor helps a small number of Metro employees. In the meantime, Metro privatized the custodians and bus drivers who worked in public schools, sticking 200 employees with 30% pay cuts and throwing hundreds more out of their jobs. Discrimination in the workplace is a painful injustice, but joblessness and union busting are also harmful.

One of the problems with strict social progressives is that they are prone to this; like they are blind to class and the economic realities that working people have to face in a thankless economy. The Metro employees who are helped by the non-discrimination ordinance may be working class themselves. I am betting they are not. But even if they are, what kind of measure urges us to protect the few and sacrifice the many? How is it anything but narrow-minded and myopic to endorse and to fundraise for Karl Dean when his only progressive credentials are on social issues: English Only and non-discrimination? Progressives are never going to get working class people to support them by writing off their interests or welfare.

When the ordinance passed, I pretty much resigned myself to the probability that it sewed up the social conservatives progressives for Karl Dean and Megan Barry (non-discrimination seem to be her sole signature cause as a liberal), but the fact that this fundraiser comes so early in the campaign cycle is disappointing. And frankly the Mayor has done the bidding of so many wealthy Nashvillians, that it wasn't like he needed the money. But maybe that's what this endorsement is about: another wealthy special interest staking their claim to the Mayor's attention.

It seems to me that TEP will not be needing their back scratched in the future by progressives who think in larger terms than an ordinance that has the smallest degree of impact on jobs and that is not really emblematic of 95% of what Metro Council actually does. TEP can obviously take care of itself. They will not be needing our support or help as much as they suggest.
Posted by S-townMike at 11/18/2010 03:50:00 PM