CM Emily Evans pointed out in the comments section of a previous post that when the fairgrounds budget was written, the impossible projections were the cause of the bothersome results that the fairgrounds board reported last Tuesday to the council:


I gotta say that I am sort of amazed that, so far, the press did not write about the manufactured losses of the fair. Rich purposefully set the budget to lose money for the three years he has been finance director. In government, as in life, if you plan on losing money you most likely will. Someone will have to educate me on how blowing a wad of the people's cash is the "right thing."

No surprise in the press uncritically assuming the validity of the Mayor's Office projections. It's not right, but they keep doing it and there is not much we can do to stop it.

However, we do need to pass the word around that these low revenues may be "bleak" because the fairgrounds projections were originally rigged to fail. Budget projections are less determined by some invisible hand of the market and more by the very human, self-interested hands in Metro Finance.

Council has had the opportunity to question the fairgrounds projections every spring since Karl Dean replaced Bill Purcell, who refused to use the fairgrounds performance as an excuse to convert public land to private real estate for the sake of developers. But I do not remember members demanding realism from Mr. Riebeling in that time. Most of them seemed to go along with Mayor Dean without protest.

That attitude continues. One of Mayor Dean's courthouse loyalists, CM Erik Cole, did not bother to question Metro Finance's formula even as he gnashed his tweeth over a fairgrounds performance that did not live up to Mr. Riebeling's forecast: 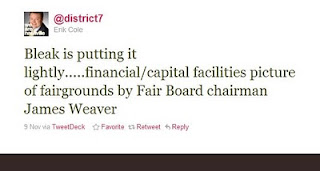 What is much bleaker is the probability that Rich Riebeling, who has been lobbying for privatization of the fairgrounds since the Purcell administration, cooked up numbers that were designed to sink the fairgrounds as a public facility.
Posted by S-townMike at 11/14/2010 09:51:00 PM