The Burden of Vandal Spotting

Yesterday morning I had the petty-crime equivalent of spotting the Loch Ness monster. I actually saw vandalism in progress. I happened to catch sight of a teenager--unbeknownst to him--cutting across an unfenced backyard at Hume Street. Spying an adolescent making a short cut is not unusual for this neighborhood, except that it was 10:30 in the morning and this teenager was not in school and he could not have been at the nearby Community Center, which does not open until noon.

But I watched him walk right up to a house, pull out a can of spray paint, and spray a bit of the gang-related graffiti that we've seen on other buildings in the neighborhood. He quickly walked away from the house, which was smart given that a busy intersection was no less than a half a block away. Here's what he was able to paint in the few seconds he was there: 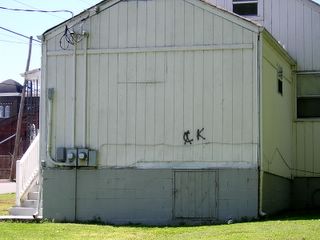 Gang-related graffiti on a house on Hume St. near the Werthan Lofts. Photograph by S-townMike.

Readers will remember a previous post where I reported that some on the Metro Council have opposed bans on the sale of spray paint to minors because the tykes might instead be budding artists simply expressing themselves or honest kids in art classes who just need a can of paint for their "projects." First, this kid was not in school, a fact that crucifies the school project argument. Second, he was painting a symbol seen in gang-related graffiti elsewhere and he was dressed in the ostentatious red and black colors of a well-known gang, which is what some of the neighborhood teens aspire to. I espied no portrait whatsoever of the artist as a young man or of a sometime student from a fine art class.

Why is this the equivalent of a glimpse of "Nessy"? Police say that actually witnessing graffiti going up is difficult, which is what makes catching these vandals so hard. But I witnessed it and I can identify the perpetrator. I have seen him walking the neighborhood a couple of times since the crime. (In fact, I saw him again today walking down a sidewalk on my street, spying a police car coming down the road, ducking behind a big, old-school [a.k.a., "Good Times"] van out of sight of the cruiser, and leaving only when the police were well out-of-sight; that's not exactly how a true artist might behave; it's more like how a guy who thinks he has been fingered by the police might behave).

So, with all the fluster of a lumberjack who just spotted bigfoot, I called the police to report the sighting. The response: an apology that there was nothing that they could do about the vandalism unless the property owner reported it, since the teenager might actually live on the property and have the right to paint symbols on his house. The officer politely told me that my options included leaving a note for the owner at the property and contacting my precinct police officers and requesting increased patrols. The former seemed a tad suicidal since I did not know the owner and the note could fall into the wrong hands; so, I dutifully contacted my precinct and asked for more patrols.

All of this leads me back to the question I posed to the Council before: if you oppose banning spray paint to prevent graffiti, then how else are you going to lead those of us who are victimized by it? Even though I witnessed a gangsta wannabe committing a crime in broad daylight, the police can do nothing unless the property owner, who probably did not witness the crime, files a report. That leads to another problem: if my property is vandalized when I'm not around, filing a report with the police is useless, since such a report would only lead to the apprehension of a person whom I was not around to see commit the crime; in other words, no one would be arrested.

It's no wonder graffiti is such a problem. It seems like an intractable problem for vandal spotters. The police can't arrest without a report from the property owner who eye-witnesses the crime and who can identify the perpetrator. So, basically all of the stars have to align in order to arrest. The Metro Council seems to refuse to lead on this issue by providing a proactive alternative to a ban bill about which it seems ambivalent (the bill has been deferred until May). So, there's no skin off their collective nose; they do not even have to break a sweat over this issue, unless vandals strike their individual properties. Meanwhile, neighbors who honestly care about the neighborhood and deterring crime are discouraged from reporting perpetrators because reporting is moot without the property owner, who may or may not be concerned to protect the anonymity of witnesses. So, the rest of us face a practically impossible situation.