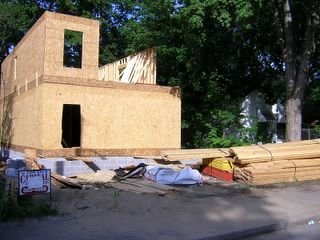 New housing construction on 5th Ave., North during the two week period that it sat abandoned and unguarded. Photograph by S-townMike.

Construction started once again this past weekend on this new house after several weeks of inactivity. Crews began building the house a few weeks ago, but then mysteriously stopped for a couple of weeks. During that time it was left unguarded. Strangers appeared on a couple of occasions and stole lumber. Police were called on at least one occasion, but because the identity of the owner was not known to neighbors, thieves could not be charged (owners have to press charges; otherwise, police officers can only hold suspects for a short period of time). It became a real concern, since all of the unsecured lumber was basically inviting criminal elements to Salemtown.

Then about 10 days ago the owner showed up. He was inspecting the site. I told him about the thefts and the police calls. He said that he could tell from looking that people had stolen stuff, including a power generator. He told me that during the two week period when no one was on site, he had been in the Caribbean and that his construction crew quit on him with no warning and walked off the site. He had hired a new construction crew and asked us to contact him if neighbors noticed any other suspicious activity.

The lesson in all of this is not for the rest of us in the neighborhood. We did everything we could to deter the thefts, short of posting ourselves on nightwatch for him.

The lesson is directed toward property owners who are building with the intent of selling: those owners are equally responsible for the public safety of the neighborhood in which their property sits. Neighborhood watches can only do so much if builders/sellers do not secure their equipment and materials or at least hire guards to stay on site.

As nice as this guy was, his lack of oversight was endangering the neighborhood. It was a serious mistake on his part not to have someone with his company overseeing the site in his absence. If the only cost is some lost lumber and a generator, then we are all fortunate. It would be unfortunate if the thieves discovered--while they were here for lumber--other potential targets they might hit in the future.
Posted by S-townMike at 6/15/2005 04:20:00 PM