One of my favorite segments on any comedy program is "New Rules" on Bill Maher's Real Time (HBO). (Maher's funniest rule: "Just because your tattoo has Chinese characters in it doesn't make you spiritual. It's right above the crack of your ass. And it translates to 'beef with broccoli.'")

I don't think that I am nearly as comical as Maher, but I would like to attempt to brush ever so slightly against the spirit of Maher's rules by giving a few of my own rules directed to people I encounter on a daily basis. I won't be giving an exhaustive list of rules here. I plan to give one now and others at future dates (which will basically be whenever I encounter troubling behavior).

Let me clarify that I do not consider myself too rule-bound or legalistic. I'd like to think that I am guided by higher principles like justice and love; but there come times when rules are needed; there come people who definitely need them. So, here is my second of a few rules:

To trashy people: If you do not want your neighbors to consider you trashy, then do not litter the neighborhood with your trash.

There are some parts of Salemtown that are just downright trashy. When I say that, I am not using "trashy" to label with prejudice a particular group of people. I am saying: 1) the trashy parts are those streets where garbage literally litters yards, sidewalks, and boulevards in those parts of the neighborhood; and 2) that trash makes those neighbors look trashy, that is, it makes them look like they don't give a tinker's damn about living in their own dump.

Well, I care, because Salemtown is my home, too. The trash you throw on your lawn or on the street in front of your house gets blown or kicked into my yard and on the street in front of my house. Since I don't litter our neighborhood with my trash, all the trash I spend time picking up around my corner of Salemtown every week belongs to other people, to the trashy people. If it were legal, I would return trash to its rightful owner, because many times before it spreads I see where it starts: 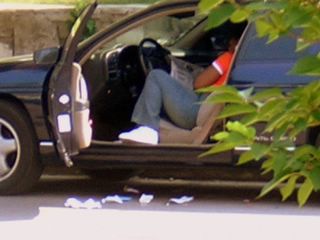 But returning trash would make me trashy, so I pick it up and dispose it myself. And other untrashy neighbors here do so too. Some even get laughed at when they try to ask trashy neighbors for help picking up litter in the neighorhood.

People become trashy not because of station in life, but because of trashy behavior. If you trash out your street to keep people away, it's working. I rarely take walks on the trashier streets of Salemtown. Can't we all just get along; by that I mean, "Can't you just clean your act up?" While you're at it, if you're not going to help clean our neighborhood up at least tidy up your yard. As it stands, it makes you look trashy.
Posted by S-townMike at 6/28/2005 09:00:00 AM