When my teenager was much younger, we used to go to the Riverwalk Fountains at the south side of Bicentennial Mall on a regular basis in warm weather. This was even before we moved to the North End. One of my most treasured pictures from her childhood is a drawing she made of herself playing in the Riverwalk Fountains with the words, "Me and Daddy at the fountains."

I've always considered the Riverwalk Fountains a great investment, because when it is operational, it is a virtual public square for people from all walks of life to gather. Not only does it offer water recreation gratis for children and children-at-heart, but it provides a shady spot in the hot asphalt jungle for picnicking families and local workers on their lunch breaks.

Alas, it seems like every year the monument stays closed for longer periods of time, and a dry river monument just does not attract as many people. Water works magic and crowds seem to respond. Once again, the monument is dry and signs are up saying that it needs to be repaired. I started keeping an eye on it beginning Memorial Day, the traditional beginning of summer. However, I have seen no one working on it, despite the fact that I drive or walk by it nearly every day. 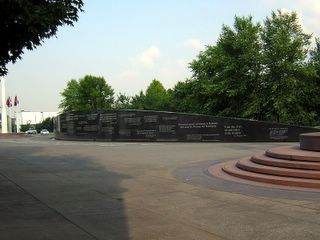 The unfunctioning Riverwalk Fountains on Bicentennial Mall. Photograph by S-townMike.

My toddler is getting old enough now so that she would really enjoy it. I've been chomping at the bit to take her, so, today I called the State Parks Department to find out what gives. The person at the end of the line told me that a nozzle is broken and that she heard that they were working on it just yesterday. Today I saw yellow caution tape around the fountains, so it looks like some work is about to be done. At the rate the state is going and assuming they shut the water off for the season on Labor Day, visitors are going to have less than two months of fountain time. It seems like we can do better than that.
Posted by S-townMike at 6/22/2005 10:30:00 PM