Village's Mark Deutschmann Is At It Again

Mark Deutschmann of Village Real Estate is once again making his constructive presence known from Downtown to the North End.

His latest impressive efforts include the Kress, which according to his City Living eSeries, will possess a Downtown rarity: "a car elevator in the climate-controlled parking garage which will provide parking for every resident plus a few extras for owners desiring a little more space."
In Salemtown, he took over the marketing of an unorthodox, tall, thin, two-story house (which I call the "Pound Cake House," because it looks like an upright slice of pound cake), he convinced the seller to lower the asking price to a more realistic figure, and he had people streaming in to look at it. After a brief window, which seemed like less than a month, the Pound Cake House is "Sold." Another Village success story; Deutschmann action figure no doubt soon to follow. 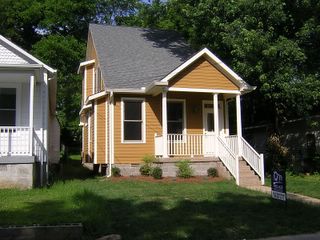