That's A Fine "How do you do, Missus Wiley.
No coffee, tea, or punch, thank you." 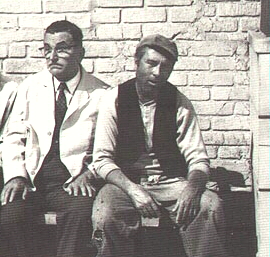 Finally hearing yesterday about the few, the proud, the Metro Council's "Real Men of Genius," I was reminded of a 1964 Andy Griffith episode, entitled "My Fair Ernest T. Bass." That's the one where Andy and Barney try to "make a silk purse out of a sow's ear": they try to make undomesticated Ernest T. into a proper and cultured gentleman in order to keep him under control.

By taking it upon themselves to dodge open meeting laws, "Eric's Eleven" has unwittingly cast itself in the role of Deputy Fife and the public (that would be us common folk) in the role of Ernest T., particularly for one scene in which Barney mimes for Ernest T. the airs put on by a well-mannered gentleman arriving at a society function. Barney impersonates a squire entering a party and gives the salutatory gestures, handshakes, and hat tips to invisible guests that he thinks a gentleman entering a hypothetical social affair would.

Ernest T., being unrefined and common, has no idea why Barney is talking without uttering words to people he cannot see. Barney's frustration causes him to break out of his role play, leading to the following exchange:


Barney: "Doggone it, Ernest T.! Those are the amenities!"
Ernest T: "I can't hear the ammenenees!"
There's something going on inside of Eric's Eleven in the Metro Council that some of us common folk just do not comprehend. They're talking to each other under the cloak of privacy about the proper comportment of our city rather than talking to us, the public.

My response to finding out the truth about the secrecy in Metro Council deliberations is to embrace Ernest T. Bass as my icon. How can I possibly understand what the Metro Council is trying to do for me if I can't hear the "ammenenees" and if I can't see their propriety?
Posted by S-townMike at 6/26/2005 09:27:00 AM