Never mind the facts: another Alderman rightly pointed out that in the Bible the Sabbath is clearly understood to fall on Saturday. In fact the Sabbath has been recognized as such for centuries by Jews and many Christians.

It seems to me to take a fairly strong mean streak to be threatened by the sight of some families and friends enjoying some leisure time together on a ball field. I cannot imagine why anybody would be threatened by organized sports on Sunday morning, unless these two guys are just jealous and they resent being stuck at church. Ruining other people's leisure time, regardless of whether those people are evangelical Christians who worship on Sundays or not, is not the answer. But they intend to use the power of their office to try and establish religious observance in White House anyway. Theocracy by any other name would not stink so badly.

But, then again, the continued spleen-venting from evangelicals who cannot possibly live without the words "under God" in the pledge of allegiance reeks from some holy halitosis itself. Those who expect that religion not be forced on children in public schools are about as threatening to evangelical religion as those who play soccer in public parks in White House on Sunday morning are to the Alderman's Baptist Church. That is, there is no threat. It is regrettable that the evangelical notion of having "your own personal Jesus" has devolved into imposing that Jesus on everyone else's person.

The irony of caustic evangelicalism is punctuated by the actual history of the pledge. 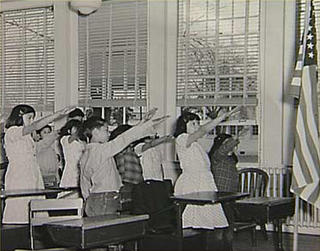 Lost in today's rancor among the evangelicals who simply stop at 1954 (the year that the Senate wrote "under God" into the pledge) and go back no further, is a sense of irony that would come if they had some proper Christian humility. The little irony of the pledge is that a socialist Christian (a Baptist to be exact) wrote the pledge for a magazine company as an advertising campaign to sell flags to schools over 100 years ago. Francis Bellamy penned these original words to the pledge:

I pledge allegiance to my Flag and the Republic for which it stands, one nation indivisible, with liberty and justice for all.

Mr. Bellamy also meant for the words "equality" and "fraternity" to be included in the original pledge, but took them out because he thought that they would be too controversial in light of widespread opposition to equal rights for women and African Americans. Isn't it ironic that conservatives are up in arms about the possible exclusion of two words like "under God" and not about the exclusion of two words like "equality" or "fraternity"? It sure is; but, no more ironic than two White House Aldermen who intend to stop people from recreating in a park on Sunday and to force them to "rest" in a church instead ... and not even on the original day that God rested.
Posted by S-townMike at 9/22/2005 02:55:00 PM