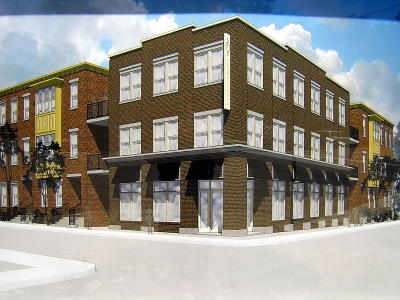 The real estate agent for the team building 5th Ave. Brownstones (same agent of Garfield Place) stopped by to chat about their developments. He also left informational brochures with me in case I encounter anyone who expresses an interest in the offerings. The Brownstones brochure is your standard bi-fold, magazine-style item, but in keeping with its more upscale feel, the Garfield Place brochure is a svelte little quad-fold, envelope-style number. 5th Ave. Brownstones are set for properties at the corner of 5th Ave., North and Garfield St. that previously contained a market that was the perpetual target of vandals and an adjoining dilapidated house.

The corner property was also the one that went before the Planning Commission for re-zoning a few months ago; that was a meeting where Salemtown Neighbors members spoke in favor of the Planning Department's more restrictive zoning recommendation, which was eventually passed by the Commission and by the Metro Council. As you can see, not only is the building a drastically and substantially more attractive improvement than what was there before, but it is also consistent with zoning sensitive to the historical character of the North End. It is also a testament to consensus that can occur between builders, neighbors, and planning officials for the common good of all. 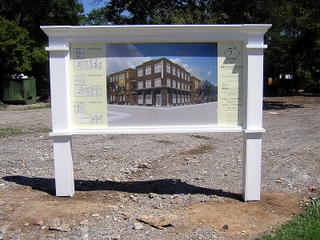 According to the company's promotional material, the brick exterior Brownstones will include 3-story "Town Homes" with 2 car garages and Flats with assigned off-street parking. The first floor of the central building contains 2 retail properties. Pre-construction prices list from $249,000 for flats to $399,900 for the townhouses. Retail space goes for $199,900 and $219,900 (corner space).

As with Garfield Place, I am surprised by the prices, which are markedly more than what in-fills have been going for over the past year. Perhaps the difference is in the amenities, which include granite counter tops, marble tubs, garages, and stainless steel appliances. I understand that we sit in one of the hottest downtown housing markets. Time will tell whether it is that hot. 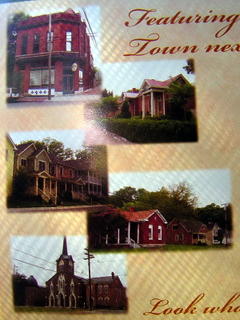 I was pleasantly surprised to find that the Brownstown brochure's section on "Nashville's fastest growing neighborhoods" includes a picture of our house with other historic and period in-fills. I made a feeble attempt to reproduce the picture at the left. Also pictured are the Mad Platter Restaurant and the Catholic Church of the Assumption in Germantown.

The plans for 5th Ave. Brownstones look promising and generally good for the neighborhood so far. I'll keep you posted as I find out more details. Please also keep me posted on anything you hear.
Posted by S-townMike at 9/07/2005 04:45:00 PM