The Dawn Of A New Season 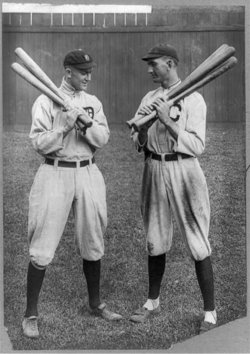 Pitchers and catchers report today to Florida and Arizona for the start of Spring Training, so baseball is underway, and summer has unofficially begun! In honor of this festive occasion, a recitation on Shoeless Joe Jackson, one of the greatest players ever (who will, thanks to the 1919 "Black Sox" World Series scandal, never be a Hall of Famer), is in order. Jackson is pictured with Ty Cobb above.

Everything he hit was really blessed. He could break bones with his shots. Blindfold me and I could still tell you when Joe hit the ball. It had a special crack.

Babe Ruth (who as a Yankee played a few exhibition games at the North End's old Sulphur Dell ballpark) said,

I copied Jackson's style because I thought he was the greatest hitter I had ever seen, the greatest natural hitter I ever saw. He's the guy who made me a hitter.

He received his nickname "Shoeless," after playing a minor league game in his stockings because a new pair of spikes had given him blisters on his feet the previous day. Fans started cursing him as a "shoeless sonuvabitch," and the name stuck.

According to authors Geoffrey Ward and Ken Burns, Shoeless Joe had been taught to bat by a Confederate veteran who had learned his baseball from Union soldiers in a northern prison camp. Ward & Burns quote a sportswriter who described Jackson:

He was pure country, a wide-eyed, gullible yokel. It would not have surprised me in those days to learn he had made a down payment on the Brooklyn Bridge .... He was a drinker and a heavy one. He carried his own tonic: triple-distilled corn. And on occasions he carried a parrot, a multi-colored pest whose vocabulary was limited to screeching, "You're out!"

But Shoeless Joe Jackson could hit like few others. The only player to hit over .400 in his rookie year with Cleveland, Jackson holds the third highest batting average in recorded baseball history (.356) behind Cobb and Rogers Hornsby. What is most amazing to me about Jackson's plate prowess, is that he hit so well in the days before pitched spit balls were outlawed and before owners started juicing baseballs to give hitters an advantage.