While I was Downtown scouting out "small urban spaces," film crews were Downtown shooting a music video. Someone named "Carrie Underwood" was doing takes at the corner of Church St. and Capitol Blvd. in a phone booth prop (there is no actual phone booth at that corner, for those fans who intend to make a pilgrimage here to see it). From the looks of it, Ms. Underwood is the country music industry's latest deb. 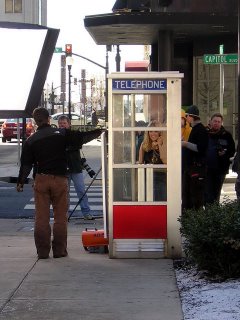 Mugging for Mike. Ms. Underwood smiles for my camera between takes. At this point I was what the Director called a "bogey" (a non-extra who is potentially in the shot). 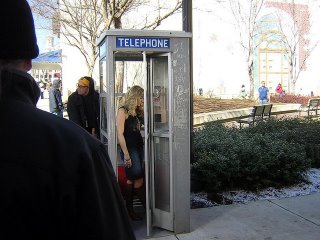 Getting ready to shoot. Snow on the ground. Mid-30 degree temps. Ms. Underwood is dressed for summertime, but she's got a space heater pointed into the phone booth. The guy in the blue short-sleeve on the right side of the picture with no space heater is an extra. 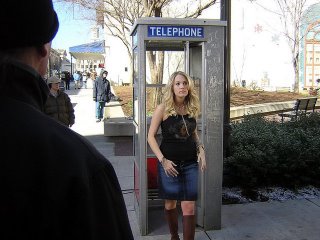 02/14/2006, 2:15 p.m. Update: A couple of the Carrie Underwood fans among the throng massing to this link today have clarified for me who she is: she's an American Idol winner (guess it shows that I don't watch that program or keep up with popular trends in Country music). Thanks to the fan sites that linked Enclave and vaulted my stats to numbers I never imagined Enclave might attain.

02/14/2006, 4:00 p.m. Update: My favorite comments on one of those fanboards publicizing these pictures are about my Underwood-cluelessness:

I will post one more picture that I took of Ms. Underwood at yesterday's video-shoot this evening between 7:00 and 8:00 CST, just to say thanks to all you Underwood fans for stopping by. You all have a keener appreciation for these pics than I do. 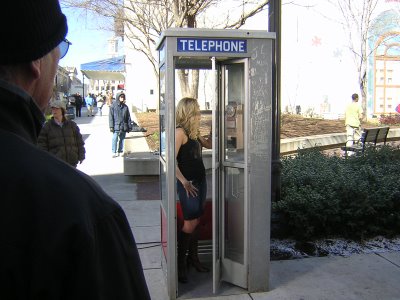 Hanging up the phone.