My viewing of the film on small urban public spaces last week motivated me to scout around Downtown to survey the public spaces there. I started with the small park at the corner of Church St. and Capital Blvd. across from the Downtown Public Library, which was mentioned in the discussion after the film. There are a number of homeless people who stay in that park during the day, probably because they can use the public library computers to go online and their restrooms to relieve themselves. As mentioned at the showing, a relatively large number of homeless people in public spaces may be a deterrent to other visitors staying. While I was at the park, one of the homeless men proceeded into what looked like some martial arts techniques, high-kicking and various gyrations at the air in front of him. That could probably scare some folks off.

I took some pictures of characteristics of the park that were mentioned in the film: 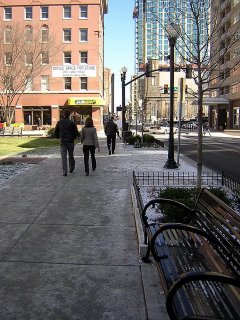 The park opens invitingly to the sidewalk and it is only slightly obstructed from the street by small concrete and wrought iron planters with small trees in them. Since "people-watching" is one of the primary attractors of public spaces, the clear lines of sight in all directions should work in its favor. 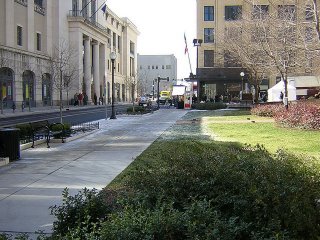 It is also lit well by direct sunlight. According to the filmmakers, spaces do not have to be in absolute sunlight, but they should be well lit by at least indirect sunlight. In the distance you may be able to make out a crowd around a telephone booth and a large rectangular light fixture. I'll tell you more about what was going on there in my next post. 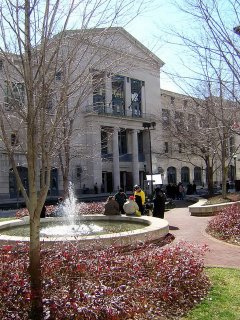 The film mentioned visible water features as strong attractors of people to public spaces. The sidewalks that run through the park converge at the fountain. Visitors to the park are in close contact with this fountain and the wall provides roomy seating. Public art is also considered an attractor; there is a mural on the wall of the building sitting flush to the park's edge (I didn't get a picture of that). 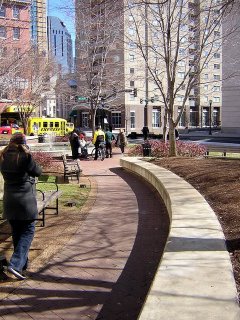 There are a lot of places to sit in this park, including retaining walls and benches, but no movable seating, which the film called a strong attractor. However, the seating provides various angles for people-watching, and there are "edges" that allow those who desire to "be away" from the crowd places to sit.

Overall, I would consider this public park fairly close to fitting what the filmmakers had in mind for optimum public space in a city. The scale is somewhat small, compared to some of the places in New York City the film looked at, but I got the impression that small scale is much better in the researchers' minds than oversizing a space.
Posted by S-townMike at 2/13/2006 11:00:00 PM