The Purchase of Hyperreality

We took our chances spending the past week on vacation in Florida, what with it being Spring Break and all. We hedged our bets by staying with a friend in Melbourne, along the “Space Coast.” It was hedging, because Melbourne seems to lie inconspicuously between and out of the way of hot Breaker destinations like Daytona and Fort Lauderdale. I spent a quiet couple of days at Melbourne Beach and even enjoyed the unhurried life of Historic Downtown Melbourne, where I sat at a quiet café table imbibing Black and Tans and puffing on pre-embargo Cuban cigars.

But what would vacation be without a hyperreal excursion? And so, we also burned one of our days on Disney World. On our way to Orlando, we drove through a planned “conservation community” called “Harmony.”

Also called “neo-traditional,” this suburban town (30 minutes from both Orlando and Melbourne) assimilates some of the characteristics of New Urbanism, including detached garages with back-alley access and neighborhoods within walkable distances to schools and to markets (yet to be built) at the town center. Most of the lots in Harmony seem to be sold, so interest in this suburban denial of suburbia looks high.

Our visit to Disney’s “Main Street, USA” afforded our second foray into the hyperreal. 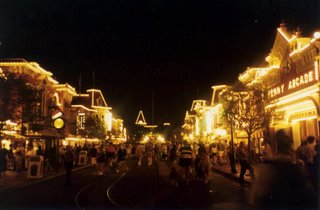 As walkable neighborhoods were lucky to survive the automotive age, Walt Disney nodded to nostalgia and created a faux urban façade in the form of a turn-of-the-century street car neighborhood. Now the Disney Empire charges over $60 a head just to experience Main Street, USA’s performative urbanism. As such, Main Street, USA represents the commodification of community, and it salves suburban anomie and alienation from community.

The repackaging and marketing of communities in America, typified by places like Harmony, FL and Main Street, USA, suggest that we have no sense of place, or at least a very slippery sense of place that shifts with market values. The drive to make money seems stronger than the will to preserve in the first place space that enhances community. In his recently published book, American Vertigo, Bernard-Henri Levy observes America’s willingness to allow cities like New Orleans and Detroit to die and writes, “That a city could die, for a European, that is unthinkable.” I am also reminded of the recent comments of the owner of Vandyland on West End when a reporter asked him his feelings about the diner's closure; he spoke with wonder about buildings existing in Europe for hundreds of years, and he conveyed his disappointment that the same cannot be said of American preservation. We don't seem to need community; we merely wipe space clean and market its hyperreality while we stage the bare perception of community at higher prices.
Posted by S-townMike at 3/18/2006 10:15:00 AM