The Fire In Her Belly

I wouldn't completely compare S-townWife to the Dragon Lady of Capers Avenue. Those of you who drive by Fannie Mae Dees Park and see the dragon sculpture straddling the public playground a stone's throw from Vanderbilt may not know that it commemorates Ms. Dees, who got her nickname for fighting Vanderbilt and other muckity-muck leaders to keep the university from swallowing that property up as it expanded decades ago. What we have left is a real public jewel in the form of "Dragon Park."

Now, as I said, I don't see an exact comparison between S-townWife and the Dragon Lady, but I couldn't help but think of Ms. Dees slaying dragons when S-townWife told me Monday night of an insidious plan she caught wind of concerning Morgan Park. After Ernest Campbell spoke to Salemtown Neighbors on Monday night about Germantown's designs on Morgan Park, S-townWife felt motivated to poke around and turn over some stones around the Community Center to see if she could find out more details about possible changes to the Park. 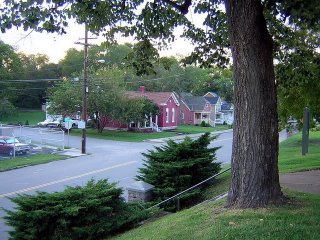 S-townWife was appalled to hear a rumor that Metro might have sold or might have plans to sell portions of Morgan Park to private developers. Those portions reportedly included the baseball diamond that sits between 3rd Ave. and 4th Ave. and the playground that sits between the Community Center and 4th Ave. According to reports, Metro was "hanging on" to the Community Center. Needless to say, S-townWife was incensed at the news and immediately wanted to start a "Friends of Morgan Park" group to fight off private development and keep all of Morgan Park non-commercial, public, and family-oriented.

On S-townWife's behalf, I contacted Metro Parks Director Roy Wilson on Tuesday and asked him to confirm or deny the truth of those rumors. After following up with staff in the Real Property Department, he responded that there was absolutely no truth to the rumors and that Morgan Park would neither change--aside from the addition of a greenway spur trail, landscaping, new playground, and gardens--nor pass out of public hands. S-townWife was relieved when I gave her the good news. Although, she is no less committed to starting "Friends of Morgan Park" to protect and to support this valuable community asset. There's no dousing the fire in her belly now. I'd like to think that somewhere out there the Dragon Lady is smiling at that fire.
Posted by S-townMike at 3/01/2006 03:15:00 PM