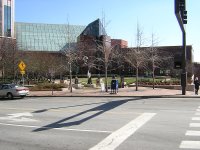 In the third installment of my series on Downtown's small public spaces (the first is here; the second is here) based on the film, "The Social Life Of Small Urban Spaces," I take a look at what has to be one of the more attractive spaces for people to gather: the plaza at the foot of the "Batman Building." Also known as the "BellSouth Building," 333 Commerce is one of the most popular Nashville landmarks, so it is fitting that one of the more attractive public spaces can be found at its base. 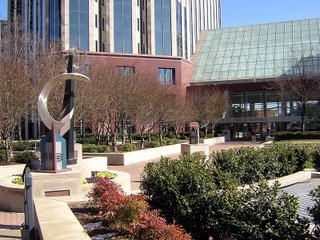 The small public space is actually relatively large, occupying both the northwest corner of the property and the southeast side of the building along 3rd Avenue. Because of the considerable size and many features of the public space at 333 Commerce, I am looking at it in two parts. Overall, 333 Commerce has nearly all of the attractors identified in the film on small public spaces.

The northwest corner of the property is bathed in natural sunlight, and it is punctuated by a public art feature. The space has a variety of plants and trees accentuating long grassy lawns. 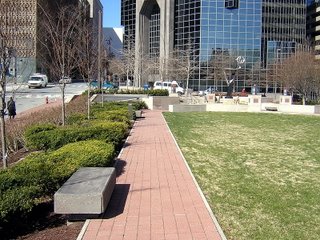 A number of benches, low walls, and steps offer pedestrians places to sit, and along with the flora provide lots of "edges" where people can go and get some sense of out-of-the-way seclusion. The day I was there I saw no food vendors, but there is a large paved a walkway that runs from the corner plaza entrance to the BellSouth Building that could accommodate some food carts. 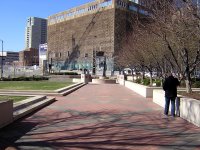 There seems to be room on the lawns for a small number of café-like tables, although too many spread around the lawn might give the plaza a cluttered look. However, there is plenty of seating without tables so that people could tarry here for lunch if there was food readily available.

The aspects of this plaza that might hamper its attractiveness generally involve street accessibility, which is limited. The plaza is ringed by low walls and hedges with a small number of entry points. Save for the corner of Commerce and 4th, the plaza has the feel of being closed off from the street, which may or may not be a strong attractor for occupants of the Batman Building, but it would not seem to be a strong attractor for casual passers-by. The filmmakers said that one of the attractors of a space is in its allowance for people-watching. If the plaza is closed off from the street, it discourages people-watching. Another strike against this plaza is that seating is fixed and cannot be moved around to suit individuals or groups. They have to take what they can get. Finally, because the space is large-scale and without hidden interesting features (such as the sound of water flowing), I don't believe it would possess that mysterious aspect that makes pedestrians want to stop and explore the space.

Once you discover this space, it seems one of the more outstanding places to gather. However, you have to be intentional in order to find it. It is not easily stumbled upon.
Posted by S-townMike at 3/27/2006 11:10:00 AM