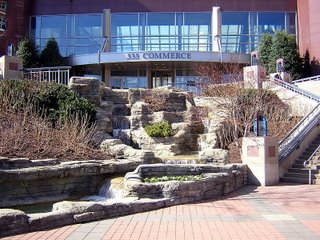 This is the second part of my look at the 333 Commerce Plaza, which sits on either side of the Batman Building. I explored the northwest corner of the plaza in Part I, finding many attractive features and few drawbacks. In this post I focus on the southeast side. Most of the attractors that the northwest space lacks are compensated by features on the other side of the building, which contains a vastly different space. 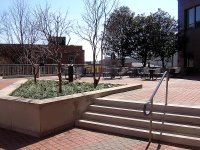 There are two significant attractors on the southeast side that pedestrians will not find elsewhere on the plaza. One is a large, audible, and long water feature that accentuates the main walkway and staircase to the building. In my opinion, except for the fountains at Bicentennial Mall, this is the most attractive water feature of any downtown public space. It starts as a tall, graduated waterfall framed by faux rock outcroppings and various types of plants. The waterfall pools at various places and becomes a stream that actually runs under one of the walkways into a larger pool with a smaller waterfall feature. 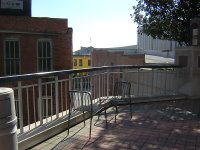 The second waterfall feature provides the edge to one of the tiered patios. That particular patio has precast cement tables and chairs that seem well-suited to having a meal. Within the plaza itself, there is so much water moving around that the sounds are distinct and interesting.

There is a second patio with seating amenities above the tall waterfall feature and off to the side of the main entrance to the building. 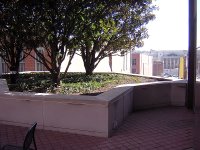 The tables and chairs on the higher patio are metal mesh, and the chairs have backs. That patio seems to lead off of an indoor café within the 333 Commerce Building. So, food and a place to park yourself to eat seem readily available in the southeast plaza. That patio also has a picturesque view to the south of the Schermerhorn Symphony Center (currently under construction). Most of the tables and chairs on this patio are bolted down, but I did see two or three free-standing chairs. Chairs that can be moved to accommodate individual tastes are a strong attractor to public spaces. 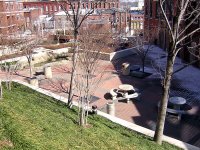 Like the northwest corner, the southeast side seems well lit by sunlight (both direct and indirect; that is considered a strong attractor), but there are areas that sit close to the buildings fronting Broadway that are shaded. Also, consistent with the rest of the property, the southeast side has numerous partially-hidden edges that encourage out-of-the-way people-watching. And like the northwest corner, this plaza has a lot of plants and trees to attract pedestrians. Unlike the flatter northwest corner, this side is more tiered, which is visually interesting, but leads to what I consider to be a significant flaw with regard to pedestrian traffic. 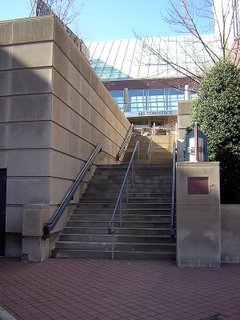 The lowest tier of this plaza looks to be about 2 stories off of street level. That effectively closes it off to the street. There is nothing interesting or attractive about the cold cement wall and two flights of stairs that act as the street level entrance to the plaza. The street is so far down that, when I was there, I could not even hear the water sounds that were so prominent in the plaza itself. When I looked up the stairs I got no sense of mystery whatsoever that would cause me to break off a sidewalk stroll to explore what might be at the top. It just looked like a generic building entrance. Even the stairs are not an attractive place to kill time. They are tall, shallow, shaded, and cold. They might be a good place to stop and cool off after a jog on a hot day, but they are strictly utilitarian in function.

So, while the southeast side of 333 Commerce provided many attractors that the other side did not, it had some of the same flaws, especially in being closed off from street level. Only the intentional explorer and those who know of the plaza would be motivated to hike up the stairs in order to enjoy one of the more attractive small public spaces in Nashville.
Posted by S-townMike at 3/28/2006 03:40:00 PM