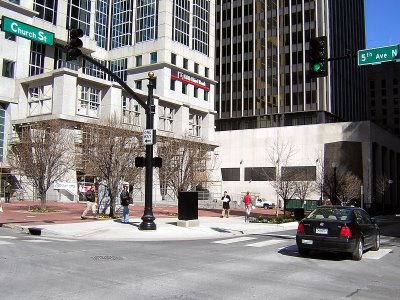 This is the second installment of my survey on small public spaces in Downtown Nashville. The first was on the small park across the street from the Downtown library. I had originally intended to post this follow-up sooner, but Carrie Underwood, the Nashville City Paper, and other North End issues rose up for writing beforehand.

Let me turn your attention next to the Financial Center at the corner of Church St. and 5th Ave., North. Let me also add a caveat: when I refer to small public spaces, I am using a soft sense of "public" rather than a hard definition of "public." I am not only referring to parks that are publicly owned, but also those privately owned properties that get used in a public manner with little or no hampering of social gathering. This is an important distinction, not because more public ownership of property is unimportant, but because it is unrealistic to assume that publicly owned properties can dominate highly dense areas. I'm all for setting aside as much property for public ownership as is possible, but very often private squares and plazas have to pull double-duty, and they should do so. So, I refer to the Financial Center Plaza as a small public space in the softer sense of the term.

A large, bricked-over plaza fronts the Financial Center with a few trees, but very little other greenery. There is no water feature, which is one of those attractors mentioned in the film. The plaza is well-lit by both indirect and direct sun-light. There is no seating provided in the plaza (which would be considered another strong attractor), and it seems generally an area meant for crowds of people to move quickly through, north-to-south and east-to-west. It is totally open to the public sidewalk, but there is nothing about the plaza itself that would make people want to stop and look. It seems a utilitarian void designed for movement.

The few "edges" to the plaza are the only spaces where gathering could occur. Those edges do not fall on the west (street curb) or on the east (an alley). The north edge is the shaded and raised building portico. The steps of the portico could invite people to sit and talk or eat lunch, but I do not know whether they are so used. Right now, scaffolding obstructs access to those steps. I also do not know whether building security allows or encourages people to gather on the steps to socialize. Only the public sidewalk along Church St. (recently renovated) can be considered a strong public space. It contains planters and a few benches, for those willing to play "musical chairs" to get a seat.

Overall, I would say that this is a relatively weak small public space for Downtown residents and workers who seek to pause somewhere to people-watch. If people will be allowed to sit on the steps once the scaffolding comes down, I would move the plaza up to the "fair" category. Otherwise, seating is nearly non-existent. There is nothing remarkable or even remotely eye-catching about the Financial Center Plaza that would make people stop and take notice. I think that it could be vastly improved with a small outdoor cafe and food vendors. That would be a nice, sun-bathed option among the many restaurants that populate the Church St. area.
Posted by S-townMike at 3/08/2006 01:45:00 PM