The Class of the Mid-Summer Classic

One of the coaches was standing next to me on that at-bat. I said, 'This is a guaranteed hit right here.' 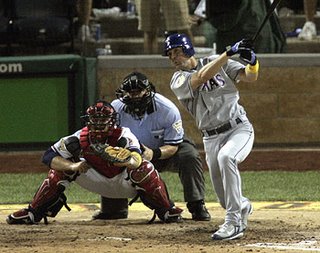 Having grown up in Arlington, Texas, I have been a Texas Ranger fan since they moved from D.C. in 1972. (The Rangers are the second Washington Senators team to move out of D.C.; the first moved to Minnesota and became the Twins in 1961; the third D.C. team is the current Washington Nationals; "Nationals" was the first name of the first-Senators-turned-Twins from 1905 to 1956; the Twins-Once-Senators-Once-Nationals could not be the Nationals and be in the American League, thus the name change in 1956; the current Washington Nationals are in the National League, so their name is no big deal, except during the All-Star game, when every National League player is a National; completely confused?) Anyway, I missed Texas shortstop Michael Young's 9th inning game-winning triple last night for the Americans because my toddler was having bedtime issues that I was pressed to address. I have since seen the highlights of Young's drive--with his sweet, fluid, full-arm extension--to the right-center field gap, and I am pumped to see Young join two other Texas Rangers (Alphonso Soriano in 2004; Julio Franco in 1990) as All-Star MVPs (the Baltimore Orioles lead all teams with 6 All-Star MVPs).

This was no fluke. Even among All Stars there is only one hitter that you would want instead of Young at the plate with runners at 1st and 3rd in the 9th inning in such a tight game. Only Seattle's Ichiro (who in 2004 broke George Sisler's 84-year-old record for hits in a season) hits better than Young's .345 average with runners in scoring position. Young is automatic in these types of situations and he showed last night why he is among the premier hitters in the Majors. Young is not only in tall cotton; he is tall cotton.

Email ThisBlogThis!Share to TwitterShare to FacebookShare to Pinterest
Labels: Baseball