What makes Maddela's story a worthy one is that it focuses at the neighborhood level to show that in the tug-of-status-war between Nashville's east and west communities and the Mayor's Office's preoccupation with Downtown development, North Nashville communities are left behind.

The only thing I would caution is not to confuse a relatively small area of District 19 (where it overlaps with the Metro Police North Precinct) with all of District 19. Here is a map with the overlap highlighted in purple: 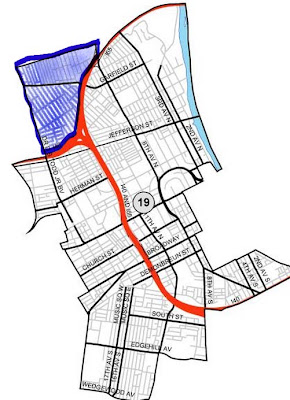 I'm not trying to minimize the neglect and blight of parts of District 19, but I am underscoring the context of the problem as a neighborhood (Jones/Buena Vista and Elizabeth Park area) one that requires more focused Metro attention (including the executive and legislative branches beyond the police) and less a general treatment of the councilmanic district.

Speaking of the councilmanic district, I find it curious that CM Erica Gilmore did not comment on Maddela's story given its framing of her district.
Posted by S-townMike at 10/15/2009 08:52:00 PM