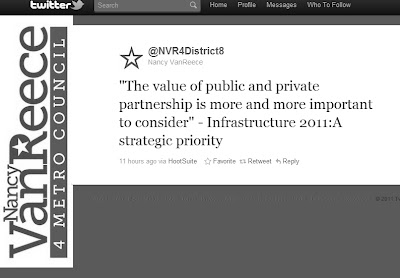 One of the more objectionable traits of the previous Metro Council (pre-2007) was their shameless tendency to funnel Metro "infrastructure" dollars toward non-profits as a way of pandering to and exercising influence over them. Karl Dean claims that he has reformed that process, and yet he still panders and uses them for influence.

An example is the way he recently delivered donated supplies from his campaign meetings to Second Harvest Food Bank with re-election signs plastered on them. So, I don't believe much has changed in the present term other than the Mayor's Office cues others as to the favored non-profits to privatize public services.

And it does not seem that that the current crop of candidates are deviating from mayoral cues. They seem bent on seeing the value without counting the costs of privatization. And in electoral terms why not? Non-profits bring with them networks of potential donors and voters and prestige associated with non-profits that enjoy most favored status within the Courthouse class. 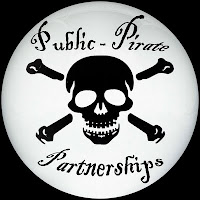 Yet, those of us not interested in sucking up to the Metro elites and those who find ourselves at the business end of municipal service delivery systems cannot ignore the costs of privatization in the same way the candidates seem to be doing. Here are just a few I have considered:

Plainly, it is opportunistic, bad faith for Metro Council candidates to embrace the value of piratization without counting the costs.
Posted by S-townMike at 6/28/2011 10:19:00 PM