Dem Party blogger Braisted wrings his hands over the local service union's local endorsements and tries to portray them as conservative because they weren't embracing his candidates. He also compares them to the other unions in an attempt to single them out for their lack of conformity.

I'm not going to defend SEIU's endorsements because I don't agree with them. However, it is plain to me that the problem of a union not falling in lockstep with other unions on Metro endorsements may have more to do with the vacuum of populism among the council's social progressives, who seem more likely to ingratiate themselves to Karl Dean than represent communities. Dean's newly discovered "neighborhoods" fundraising focus will not change his autocratic, exclusive style of leadership that sucks up the rather feeble, utterly reliant leadership styles on the Metro Council. 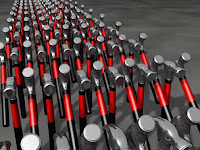 And a simpler explanation suffices for the unions who have lined up behind the Dean bloc on council: they don't want to be cut out of the power networks built by money and strong-arm politics at the Courthouse. Despite Braisted's question begging, these endorsements are not likely related to ideology, but instead to self-interest. For example, would firefighters and cops have endorsed Dean and his Metro pets if the latter had tolerated cutting their wages and benefits and laying them off as in the case of public school service workers? I doubt it. SEIU opposed convention center construction because it opened up service employee wages to the risk of cuts to pay for future budget overages. So, why should they feel beholden to support Dean supporters? As the only union to be cut loose so far, SEIU should not be blamed for advancing their own self-interests after the service labor setbacks during Dean's watch.

In the end this is convenient, and thus, hollow jabber from a blogger who doesn't protest one iota when President Obama caves to Republican agendas. Yet, he pounces on and pigeonholes, without a second thought, SEIU as conservative for refusing to endorse candidates who have not defended their interests. Other than these endorsements, Braisted fails to demonstrate that the union frames their ideals conservatively. Look, Braisted is bent on supporting Karl Dean and the candidates most likely to advance Dean's career, because we're closing in on election time and that's just what he does as a party wonk and consultant, even at the expense of more razor-sharp reason.


UPDATE: Samantha Yeargin contends that my reference to Braisted as a Dem Party blogger is disingenuous.
Posted by S-townMike at 6/30/2011 11:28:00 AM