I have to admit that when Karl Dean's former campaign opponent David Briley came out and endorsed the Mayor for re-election quickly and then held a community gathering at his house for the Dean Team I was left wondering whether he believed more strongly than some of us that Dean was somehow vulnerable to Craddock. Otherwise, the speed with which the endorsement was made seemed illogical (short of other dynamics that might be operating beneath the public radar).

A blog post published by Briley today seems to be interpreted by the news media and spun by the Mayor's loyalists as equal parts reaffirmation of Karl Dean and endorsement of Jason Holleman (who has been attacked mercilessly by the campaign to re-elect's hired goons and stooges while Holleman's opponent Sarah Lodge Tally is getting a little help from friends of Dean). I'm not convinced the parts are as equal as either the news media or the Dean Team would like us to believe.

Lord knows none of the other contests I see have even breached the question of when the Mayor should be challenged. And make no mistake, every single candidate for office who refuses to articulate specifically how s/he would stand apart from the Dean administration is at worst cheating voters and at best doing them a disservice. Yet, whenever I ask a candidate about Dean policies with which they disagree, I get no specific answers. I'm not convinced that any of the new folk running for council will hold the administration accountable for much of anything.

David Briley minces no words for Sarah Lodge Tally's ludicrous litmus test that next term's representative from District 24 has to check with Karl Dean for permission before voting instead of making decisions based on constituent feedback and critical reason. She's wrong. And let's not forget that the campaign to elect Sarah Lodge Tally is run, financed, and promoted by Karl Dean's connected minions.

So, it's pretty clear that Briley's blog post defies the double endorsement spin we read in the press and online in the strength of the Holleman endorsement itself. However, one other point should not be ignored. It seems to me that Briley soft-pedals his earlier endorsement of Dean in this post by framing it in terms of Craddock's candidacy: 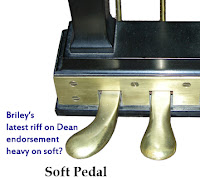 In May, I had an event for Mayor Dean’s re-election at our home. At that point in time, my neighbor Michael Craddock was contemplating a run for Mayor. Michael has his strengths and no doubt will continue to be involved in Nashville after his service on the Council, but he was not my choice for Mayor. Looking at Karl and Michael it was clear to me that one had the experience and vision to lead the City forward and the other did not. The decision was easy. Nevertheless, my support for Mayor Dean is not an endorsement of every decision he’s made.

This muting--in which even the Mayor's experience and vision are defined by them not being Michael Craddock's--cannot be sitting well with the Dean re-election campaign despite the PR efforts. David Briley, once touted as a mayoral candidate most likely to be neighborhood-friendly, held a neighborhood gathering to announce his support for Dean. Now it seems that the gathering was more a move against Craddock than for Dean.

But defining Dean relative to Craddock was the substance of the Dean campaign before Craddock did the predictable thing and dropped out. Dean was cast merely the alternative to Craddock's "bigotry." While Dean is a powerful Mayor, he is not a strong one. There is a profound difference between the two. Power invokes fear, and the fear in this campaign has been invoked by the unlikely prospect of a Mayor Craddock. A strong Mayor is able to inspire constituents with a vision much higher than fear. As Briley intimates, Dean's vision is distinguished by it not being Michael Craddock's.
Posted by S-townMike at 6/16/2011 11:48:00 PM