Progress, thy dance is a two-step 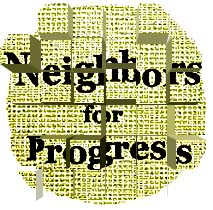 The State Fair Board meets in the morning, and so, of course Neighbors for Progress/South Nashville Action People spokesperson Colby Sledge continued his media tour to discredit the Fairgrounds referendum by appearing on NewsChannel5's "Morning Line" today.

The Sledge two-step abides. When the issue was moving the flea market to Hickory Hollow, Sledge supported it. Then the issue shifted to demolishing the racetrack, and Sledge supported it. When the operation of the racetrack reasserted itself and a broadly-informed community plan was called for, Sledge trotted out a scheme to entrench NFP control over operation and plan.
This morning Sledge said that NFP has shifted again, this time to supporting "something that benefits all the neighborhoods around there as they continue to grow." Maybe he is simply shifting to attract broader support, because heaven knows NFP did not get very many signatures on their demo-the-racetrack petition. One source tells me that their online petition only has a little over 100 signatures of identifiably registered voters. Complain as he might about the legitimacy of some of the 11,000 signatures on the petitions to require 6 more council votes to demolish and build "something that benefits" NFP (if not Mayor Karl Dean), he cannot deny that his camp is outstripped petition-wise.

But in the context of every other shift Sledge has made, and given the fact that they now have a lawyer writing publicized letters to the DA trying to undermine the referendum in the run-up to August, it is hard not to see this morning's PR as just another cynical tactic to maintain desperate leverage rather than working toward a consensus on a property that belongs to all of Davidson County. It is noteworthy that CM Jamie Hollin replied over a call-in to the show that if NFP attorneys really believed they had a legitimate case to stop the referendum they would file a motion in chancellery court rather than posturing to the DA to grab media spotlight. It is also worth noting that Sledge is a former journo who likely has firsthand knowledge of bones to throw to get the mainstream media to bite.

It was priceless that on the heels of Sledge's comment that the "tone of the conversation needs to change" a NFP caller accused those of us who refuse to go along with the Mayor's redevelopment plan of participating in "big DC politics" and of bullying those who support selling off the Fairgrounds. Hell, I've been falsely accused myself of trying to drum up petition signatures for Save My Fairgrounds in Wedgewood-Houston. Change the tone? Sure. But ironic, too, that Colby Sledge works for the Tennessee Democratic Party and thus operates in machinery much closer to "big DC politics" than any of the rest of us in this debate. That won't facilitate a tone change.