In last year's Best and Worst I offered some New Year's resolutions for each of the Metro Departments I covered. None of them were realized, so I won't even try this year. I did stay with last year's form of picking the 3 services whose activities got most of my blogging attention. I also continued the idea of tacking the rest of the mentionable departments after the big three.

Without further adieu, the best and worst of the services that are supposed to be of some benefit to us.

Metro Council
Surprisingly to me, there was a lot more good than expected from the council whose term ended with last August's elections. That council launched the nondiscrimination ordinance in the wake of the Belmont soccer coach controversy. That ordinance, destined to be blocked by the right-wing Tennessee General Assembly, prohibited Metro contractors from discriminating. Also good was the joining together of both council progressives and conservatives to stop Mayor Karl Dean's unilateral plan to demolish the racetrack after a huge, historic turnout to the public hearing. Not even Vice Mayor Diane Neighbors' draconian public hearing tactics could derail the results. To their credit, the council required any Fairgrounds redevelopment to include a bona fide, inclusive community planning process. Finally, CMs approved Mike Jameson to General Sessions Judge. Like I said, it surpassed my expectations.

On the other side, the council generally behaved like the cowed tools of Dean it has generally been. The Budget Committee followed the Mayor's budget hearing script, and they failed to properly review County Clerk John Arriola's inappropriate spending habits, which later blew up in the media, resulting in belated CM calls for Arriola's ouster. They also failed to do their due diligence on objectively filling a Criminal Court Clerk vacancy, instead approving the Mayor's hand-picked choice, Howard Gentry. Then there is the newly elected council, which looks like it will be more Dean-dependent than the previous council ever was. Having learned nothing from the Mayor's summer IQT debacle, the sheep herd moved to approve the Mayor's plan to allow LifePoint to pay no taxes for several years and reduced taxes up to 15 years in exchange for property that could have itself been incentive to relocate.

Mayor's Office
The main feather in Karl Dean's cap had nothing to do with his re-election talking points to staged neighborhood meetings of "economic development, economic development, and economic development". It was signing the nondiscrimination ordinance over the protests of the local Chamber of Commerce and in spite of his past reticence to sign anything that regulated the "free" market. Sure: it seemed arbitrary and capricious given the story of his change of heart was a chance encounter with wealthy booster Mike Curb, but any time Karl Dean breaks from the Chamber it is beyond all doubt newsworthy and laudable. To his credit, Hizzoner also finally followed through on his longstanding promise to move the Metro Action Commission's main offices and utility bill support service to more accommodating facilities than Salemtown's old Fehr School.

And then there was the rest of the mess. Dean didn't visit Antioch after a February tornado, but he did carry on with a non-essential trip to Japan in spite of State Department warnings against non-essential travel. He announced a plan to reduce the size of North Nashville police force and to increase the size of the suburban force. The Mayor stuck to his plan to demolish the Fairgrounds Speedway despite mounting losses on Fairgrounds redevelopment and demonstrated public pressure against demolition. However, he never consulted the Fairgrounds staff for feedback before introducing his demolition plan. Obtained emails showed Dean staffers tried to exclude some preservationists from the public meeting process. When they were not trying to torpedo their Fairgrounds opponents, the closest Dean advisers accepted gifts of vacation lodging and other perks from a no-bid Metro contractor in violation of a 2008 executive order signed by Dean.

Meanwhile, the Mayor was expanding his staff. He hired former Bredenistas at prices that could have paid for more Metro services. He doubled his communications staff to "serve the needs of the media".  The hirings did not sit well with all, given that in 2011 less than 250 stormwater projects completed after 2 years and road maintenance and repair needs were lagging behind. The Mayor also cut back the concept of a green roof on his expensive new convention center to a small fraction of the structure to save money. In July the Mayor lost a jury decision and in December he lost the appeal, both of which guaranteed that the convention center budget was busted. Dean told the press in June that "our citizens" expressed "overwhelming support" for a new convention center, even though construction never enjoyed more than 37% support in polls; last year construction only got 26% support.

Dean, a politically connected lawyer besides being Mayor, plead ignorance on news that fellow Democrat Phil Bredesen had leveraged the transfer of millions of dollars in non-hockey-event sales from Metro coffers to the Nashville Predators hockey club. Dean raided funds designated for services to pay for streets, parks, libraries, and public safety in order to subsidize professional hockey in Nashville because he had to redirect tourist taxes earmarked for the Predators to construction of the Music City Center.  The Mayor's Office looked the other way while the Predators tried to extend a no-bid, noncompetitive contract with an NHL insider and while they lied about checking with other potential vendors. Finally on the sports front, Mayor Dean dropped $157,000 on a ballpark feasibility project, but he concluded in December that a new ballpark is a "luxury." 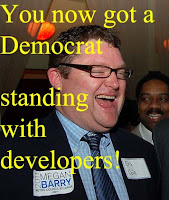 Karl Dean joined forces with GOP Governor Bill Haslam to offer the IQT company government subsidies, tossing 1,000 Canadians out of their jobs; because of their admitted failure to adequately vet IQT, they were shocked when the company declared it was not moving to Nashville. On the education front, the Mayor flung himself even deeper into privatizing, venture philanthropy trends in public education with Teach for America, charter school incubators, and "CEO Champions".  He earmarked $10 million for KIPP Academy (charter) while bona fide public school infrastruture continued to crumble.

As for his re-election, Dean supporters criticized any opponents who dared politicize the 2010 flood, while the Mayor held campaign events under the banner of "rising" from the 2010 flood. Shockingly, the Mayor's re-election also solicited journalists to join his "community steering committees".

Metro Nashville Public Schools
It is rather depressing, as a public school parent, to say that I found nothing good about MNPS this year. I wish I could find a half-full glass.

Director Jesse Register signed a letter with wealthy special interest group leaders from Nashville's Agenda to oppose the state's plan to streamline teacher evaluations. Charter school and innovation czar Alan Coverstone held a North Nashville "collaboration" and in private school fashion did not invite everyone with a stake in North Nashville schools. MNPS's advocacy partner Stand for Children gave subtle indications that some interpret as moving against teacher unions as other Stand organizations have done in other parts of the country. An embarrassing YouTube video appeared in June that showed the SFC CEO telling an audience that his organization used the best lobbyists in Illinois to jam proposals down the throats of teachers unions. SFC Nashville waged its own campaign by endorsing Karl Dean for Mayor, in spite of the apparent conflict of interest. While my kid's underfunded North Nashville school suffered for a lack of computers, a Boston charter school company was spending over $100,000 (stipend + benefits) on each of its twenty-something MNPS charter school founders.

Writing these each December becomes harder rather than easier. I keep looking for more progress in Metro, but it is a rare commodity.
Posted by S-townMike at 12/31/2011 05:20:00 PM