One community leader not likely to get a personalized invitation to Wednesday's ribbon-cutting ceremony for the West Police Precinct is Trish Bolian.

In spite of the fact that Trish was prescient about the fall out of Mayor Karl Dean's decision to locate the precinct in a refurbished car dealership near Richland Creek, her requests for information on plans for the police station and flood plain mitigation have been ignored both by the news media and by the Dean administration.

Trish, one of the neighborhood leaders who correctly warned the Mayor's Office that a major flood would would be catastrophic for the building (as it ultimately was on May 2, 2010), read Tennessean reporter Michael Cass's story last March on a flood team that the Mayor put together to gather information and make recommendations under the direction of Metro Water Services' Scott Potter.

Trish responded to the Tennessean story the next day by emailing the following to Cass (CC'ed to Potter):

Michael, I am writing to you both to commend you for the article you wrote yesterday "Flood team seeks way to keep city safe" and to ask that you do another article on this topic to answer some questions that have not been answered till now regarding the relocation site of the West Nashville Police Precinct to the former Frensley property on Charlotte.

I have included photos taken on May 2 at this site (and would be happy to share a video also shot that day with the full sound effect of raging water) if you would like to have it.

The questions I would like to ask about your article are these: 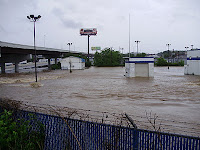 1. Is this "team" the same one that was referred to in an article by S. Toone regarding "Agencies unite to develop flood preparedness plan"? That article mentioned that the meeting was to be held on Feb. 22. No mention was made of time, place. It also mentioned that "government officials will meet with....neighborhood associations on Feb. 22 to begin the process of developing the plan". I am the President of the Hillwood Neighborhood Association and a founding member of an organization connecting many neighborhood associations together. I never got any notice nor did anyone post any specifics regarding this meeting on the multiple neighborhood associations website leading me to form the conclusion that no one was notified. Kathy Baker, former president of the Hillwood Neighborhood Association for 4 years, placed many calls, sent multiple e mails regarding specifics of this meeting. No specifics were ever obtained despite much effort. I placed a call to the Mayor's office and was told that I would be connected with the person in that office coordinating this meeting. This was on Friday before President's Day. Till now (though I left a detailed message) I have never gotten a call back. Needless to say, from my perspective there was no input from neighborhood associations on Feb. 22 or any follow-up meetings on this topic. 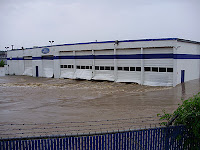 2. In yesterday's article you state: The Metro Council voted unanimously in December to ban development in the floodway, and any new construction in the flood plain now has to meet a "no adverse impact" standard, meaning it won't result in increased flooding. The new police precinct is partly in the floodway and in the flood plain. As it stands now, a wall is to be erected around the front of this building to try to keep this site from flooding in the future. At the Feb. 2011 meeting at Cohn School regarding this police precinct relocation, I asked how construction of this wall would affect areas on the other side of it such as Pep Boys (where people were rescued by boat) and subsequently down into the Nations where eventually 81 homes are to be bought by the city due to flooding. Answer: basically that no one knew but they didn't think it would create a problem. Common sense dictates that if flood water can't go where its force is pushing it (against a stone wall) it will keep moving to the place where there is no stone wall...right into Pep boys and that shopping area and into The Nations.

How can construction of this police precinct at this site meet this Metro council ban? 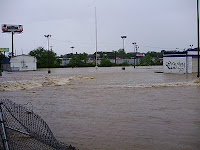 3. Your article goes on to say "Potter said the city will look at ways to store and absorb water ......and move critical services out of harm's way, including utilities, POLICE STATIONS....".

IN THIS CASE WE ARE NOT MOVING A POLICE STATION OUT OF HARM'S WAY WE AE SPENDING WELL OVER $14 MILLION DOLLARS TO PUT IT THERE right in the very site the above photos were taken! How can this be?

Of course, the NES station on Briley totally flooded as well, people were rescued from the roof and 27 bucket trucks were lost there and I constantly watch the rebuild there on the same site..looking more and more each day like it did before the flood. 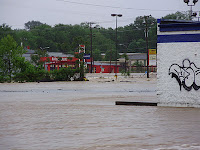 I really would urge you to write another piece regarding this matter. As late as today, crews are busy at work at the former Frensley site spending tax payers money to build a police precinct (2nd largest in the county) and where the new police chief says that there will be enough parking to store extra police cars! How can any of this happen when the flooding prevention folks say "we are moving critical services OUT of harm's way...including POLICE STATIONS"!

I asked Trish if she ever got a response from either Cass or Potter and she told me that she never did. Having the reporter and the MWS bureaucrat ignore her after she specifically detailed for them how she and other leaders were ignored earlier strikes me as insult to injury. For her part, she continues to feel that people in influential positions cannot tolerate inconvenient questions. I cannot help but agree with her. Unless it fits the dominant narrative, generated by Dean's communications office and parroted by journalists, reality-based dissent is ignored.

As best I can tell, the "community meetings" played up in the reporting actually amounted to just one meeting held in late July for the purpose of making a PowerPoint presentation (which made no reference to the West Police Precinct in sections on Richland Creek). It appears that the primary means of collecting public feedback is not meetings but an online SurveyMonkey survey that allows people to to rank "five main criteria used to evaluate damage reduction solutions". It seems predetermined, minimalist, and controlled. If it does not mistakenly assume that everyone concerned has online access, then it is designed to limit rather than to encourage public response.

Wednesday Mayor Dean will go on ignoring West Nashville concerns about the flood-prone building on Charlotte Pike by tying it up with a pretty ribbon, which he will then cut in order to open the precinct up to whatever the future holds. And somebody from the Tennessean will no doubt be there to convey the festivities exactly as they are staged.


UPDATE: Trish's email mentioned the mitigation efforts at the new police precinct possibly pushing future floods on to surrounding properties in the Charlotte Pike area. Here is video of the May 2010 flood that hit a Pep Boys franchise near the precinct property. All of the water that flooded the old auto dealer in the still photos above would have to go somewhere else.

Rather than treating the Charlotte Pike flood plain as a natural barrier and not encouraging further development, the Dean administration seems content to build and then displace future flood waters elsewhere. [H/T Charles Maldonado]
Posted by S-townMike at 12/13/2011 11:06:00 PM