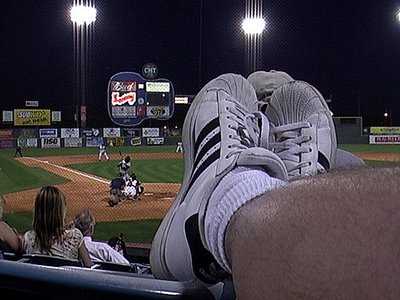 Tonight was a gorgeous night to kick back and watch the 2005 Pacific Coast Champs defend their title against OK. It is good to have baseball back in Nashville even though the Sounds management don't seem to be putting too much effort in the upkeep of Greer Stadium beyond the field itself, which seemed to be in excellent condition. 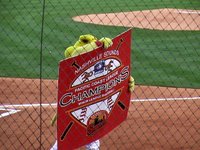 Our primo seats are still unspruced. They are dilapidating and cracking plastic. The scoreboard, which was squirrelly most of last year, seemed to be completely on the fritz with the exception of the clock and the line score. I don't expect much from scoreboards; I don't need to see the neat little cartoon batters and runners or the word "Charge!" But I do like to be able to see who is at bat, what that player's batting average is, and what he has done so far in the game, all of which were completely impossible on the largest guitar scoreboard in the world (are there any others?). I guess they are saving money for the new ballpark, which is expected in 2008. 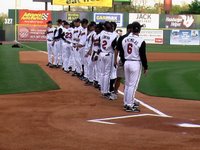 So, what are we season ticket holders to do next year? Sit on steps and keep score ourselves? Anyone who drinks beer and socializes at ballgames knows that the former is fine, but keeping the score ourselves is impossible. I'd have to isolate myself and drink water. But I digress. The Sounds did dominate and win the game rather handily, as my family sat around and rudely reminisced about all of last year's players who played so well that they got called up to the dance in Milwaukee by mid-season. However, if this club continues as they did tonight, we'll completely forget those other guys; well, we may not completely forget Prince Fielder. 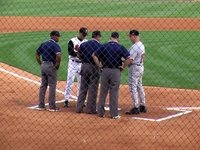 The one other hitch in the night is that we had to cross a picket line to get into the stadium. The minor league umps are on strike for higher pay. They make a measly $17,000 a year, so I certainly don't blame them. I expressed my sympathies to one of the picketers, but I also told her that we had already paid for our season tickets. "If you would have warned us before we bought the tickets," I told her, "I might have given second thoughts to buying the tickets." That would have been a tough decision for me, because I feel guilty crossing picket lines. The game was being called by scabs replacement umps, who did a decent job for the +/-$17,000 they were getting. Given all of the money the Sounds are saving by not making repairs to Greer Stadium, they may be paying the replacements more, but I doubt it.

Click here or on the screen shot below to watch video I shot of Sounds outfielder Nelson Cruz driving in the 4th run of the game for the Sounds in the 3rd Inning. 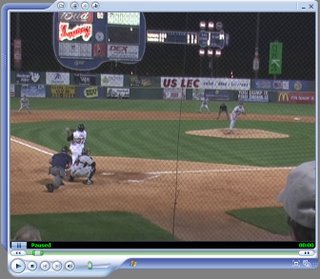