Conservative Blogs: It All Depends on Whose Looter It Is and We Reap What We Sew But We Steal What We Don't Sew from Those Who Do 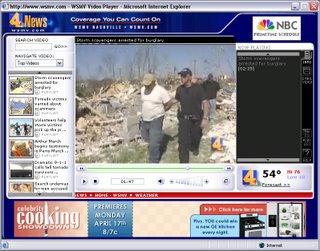 I've been waiting to see if the conservative bloggers would start promoting shooting local looters on the heels of last week's tornadoes as they did in the wake of Hurricane Katrina last year, but the silence on the right with regard to "shoot first and let God sort 'em out" has been deafening in this case. Last year we could not get them to shut up their calls for mowing kids down over a pair of Nikes. But now the logic does not seem to be applicable when looters are stealing chunks of houses. But wouldn't shooting looters rather than arresting them send a much more powerful message to other potential looters (many of whom were no doubt snarling the traffic southward down Gallatin Road all the way to Briley Parkway this past weekend)? So, what's with the silence? I won't say that the difference in conservative outcry has anything to do with the difference in the race of the looters we are seeing on television from those we saw in New Orleans, but the rightwing seems a lot less frenzied at these white-boy looters.

What I am seeing on some of the conservative blogs is the promotion of the recently released report that Tennessee ranks 45th in taxes per capita by state. On those blogs where level-headed comments are allowed, rational people are setting the record straight on that ranking. Some of my favorite retorts to the rightwing love affair with low-tax rankings:
Common sense cuts through the hooey, yet again.
Posted by S-townMike at 4/11/2006 01:00:00 PM