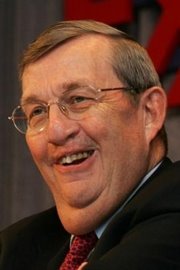 Here is the face of Big Oil (those guys who are raking in millions by the tanker-full while us poor saps are paying ever higher prices at the pump). This is Lee Raymond, the retiring CEO of Exxon. Mr. Raymond not only got paid handsomely--some might say "obscenely"--while he worked for Exxon, but now that he is retiring he is guaranteed to receive the largest retirement package in history: $400 million. It's a shame that astronomical gas prices cannot retire with him.

This is the largest giveaway of the public's oil and gas in American history, at a time when gasoline is at record-high prices and oil companies need trains to take their ill-gotten profits to the bank. In 1996, crude oil prices were down at $10 a barrel, and the corporations ran to Washington crying that they needed "royalty relief" as an incentive to drill the deep wells in the federal waters of the gulf. Clinton and Congress complied, eventually waiving all royalties owed to We the People for Gulf drilling leases awarded in '98 and '99. At today's prices, with oil soaring to $70 a barrel, the companies expect to extract $65 billion worth of oil and gas from those leases in the next five years, giving them a fabulous profit. Yet, despite the jack-up in oil prices and the windfall profits, they still claim that they deserve full "royalty relief," costing our treasury $7 billion.

So, the next time you're standing at the pump watching yourself throwing your good and hard-earned money down the bottomless pit of the highest retirement packages in history, remember the picture of Lee Raymond, for it is symbolic of all those fat oil cats who make your life more difficult in order to give themselves more ease.