Tennessee Republican gubernatorial candidate, Jim Bryson, joined on as co-sponsor of a bill that would make a salute to the Tennessee flag the official state salute. There are a few problems with the salute, written by Lucy Steele Harrison 30 years ago, which goes like this:

Three white stars on a field of blue
God keep them strong and ever true
It is with pride and love that we
Salute the Flag of Tennessee.

The first problem is that it is more of a prayer to God than it is a salute to the flag. I'll thank the government to keep its greedy paws off my faith.

The second problem is that the General Assembly already recognized an official salute to the Tennessee flag in 1987, which more appropriately fits the idea of a salute to the flag:

Flag of Tennessee, I salute thee
To thee I pledge my allegiance with
My affection, my service and my life.

My guess is that the Christian extremists in the Assembly will find a way to rescind the original decision saying something like it was passed in an age when our state government was run by a bunch of atheistic liberal hippy infidels trying to take God out of government. But really, the second pledge is better because it is one that all Tennesseans of every religious belief--even conservative Christians--could recite without qualms. Nobody's going to object if individuals want to stick the word "God" in the mix while they are personally saluting the flag. 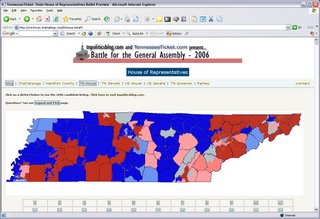 The third problem with the Harrison pledge is that it is already archaic if you look at a current map of Tennessee politics as posted on TennesseePolitics.com. Rather than the historically correct three regions, the politically correct (pardon the pun) regions of Tennessee actually number 5 or 6 in varied shades of blue and red along the progressive-conservative continuum. Maybe the Harrison prayer should be rewritten to include the words, "Five blue, light blue, red, pink, and gray stars on a field of white ...", with the Tennessee flag reworked to suit. Or maybe we can just stick with the flag salute we got in 1987.
Posted by S-townMike at 4/19/2006 08:55:00 PM